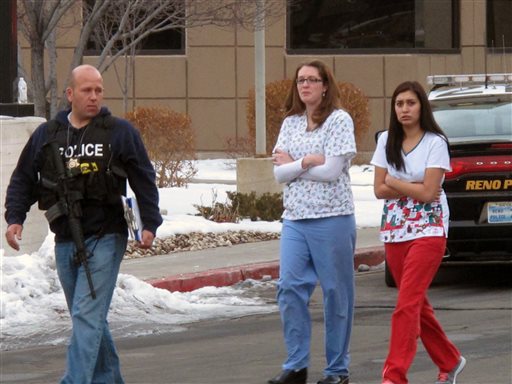 Police escort hospital staff away from a medical office building in Reno, Nev., on Tuesday, Dec. 17, 2013. A suicidal gunman killed one person and critically wounded two others before turning the gun on himself on the grounds of Renown Regional Medical Center Tuesday. (AP Photo/Scott Sonner).
US

Alan Frazier has been identified as the who police suspect is the gunman who shot three people–killing one of them–before killing himself on Tuesday at Renown Regional Medical Center.

Police searched the home of Frazier on Wednesday.

The Plumas County sheriff, and neighbors, identified the alleged shooter to the Reno Gazette-Journal. The house is in Lake Armanor, California, about two hours northwest of Reno.

Mike Hawthorne, one of the neighbors, said that last time he talked to Frazier, “He told me he wasn’t coming back.”

Jeanette Hawthorne said Frazier, 51, was a hunter and a fisherman.

“It blows my mind what happened,” Bob Hammill, another neighbor, added. “I think he was in a lot of pain.”

“Part of the investigation and service of the search warrant was to help identify next of kin,” Hagwood said, adding that authorities have established he has California relatives outside of Plumas County. He said investigators were “taking every measure possible to make notification of family as quickly as they can so they’re not watching the news and having the unsettling experience of finding out that way.”

Police said that the gunman was on a mission of violence when he calmly entered a third-floor urology office and opened fire with a 12-gauge shotgun, killing one doctor, critically wounding another and shooting a third victim after warning patients and their children in a waiting area to “get out.”

A witness who was among those the shooter passed in the waiting room said that the man could have killed many more people at the Reno medical complex if that was his intent.

Detectives have not been able to establish a motive or any relationship the man may have had with the two doctors and the relative of a patient who were shot Tuesday before the gunman killed himself.

“While we piece this thing together, we are trying to figure out what that relationship is, if there is a relationship at all,”Reno Deputy Police Chief Mac Venzo said.

“But the fact the shooter went through the first and second floor, made his way to the third floor of the building, would indicate to me it is not a random event,” he told reporters at police headquarters.

Police identified the slain doctor as Charles G. Gholdoian, 46, a urologist at Urology Nevada within the Center for Advanced Medicine on the campus of the Renown Regional Medical Center. His colleague, Dr. Christine Lajeunesse, was conscious Wednesday but remained in critical condition at Renown, hospital officials said.

Lajeunesse and Shawntae Spears, 20, who was accompanying a family member on a visit to the doctors, each was shot once. Spears’ condition improved Wednesday from critical to serious, the hospital said.