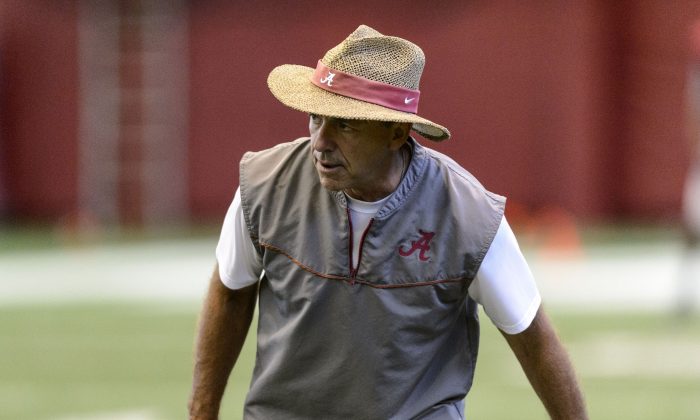 Alabama will face West Virginia on Saturday at 3:30 p.m. ET at the Georgia Dome in Atlanta. A live stream is available.

Alabama is the No. 2 ranked team, while WVU is unranked.

He made a reference to the New York Yankees, saying: “I mean, Joe Girardi tells (Masahiro) Tanaka he’s starting in the game, he’s not telling him he’s going to pitch nine innings,” Saban said. “Does he tell them that or does he just pitch until he doesn’t pitch well anymore?”

‘Bama opens vs West Virginia with QB questions
ATLANTA (AP) — Time to get some answers about Alabama’s quarterback competition.

Florida State transfer Jake Coker and fifth-year senior Blake Sims have been vying for the top job throughout preseason practice and coach Nick Saban says they have been running neck-and-neck. The second-ranked Crimson Tide’s opener against West Virginia at the Georgia Dome on Saturday is probably another audition for both.

“I think it’s our responsibility to give both guys an opportunity,” Saban said. “That’s how we recruit players to come here, that they’re all going to get a fair opportunity to play. We’re going to choose the best players that give our team the best opportunity to be successful based on how they perform. Both guys have performed well, and Blake has performed very, very well.”

Where exactly this leaves Alabama at the most important position on the field is anybody’s guess.

Coker came to Alabama after serving one season as Florida State’s backup to Jameis Winston. Seminoles coaches insist that Coker gave the eventual Heisman Trophy winner a legitimate run for the starting job before last season.

Coker arrived in Tuscaloosa with much hype as the presumptive replacement for AJ McCarron. Saban did his best to knock down those assumptions.