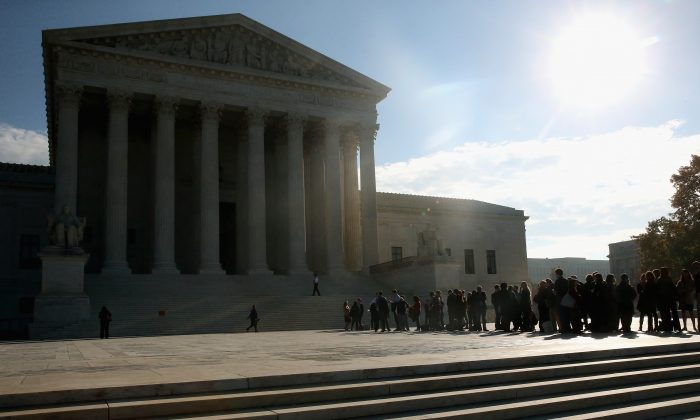 People stand in line to enter the US Supreme Court building, November 12, 2014, in Washington, DC. (Photo by Mark Wilson/Getty Images)
US

Alabama Town Is Running An Extortion Scheme on the Poor, New Lawsuit Says

The small town of Clanton, Ala., is running an extortion scheme meant to take money from people who cannot pay their traffic fines, according to a new lawsuit filed at a federal Alabama court Thursday.

When individuals cannot afford their tickets, the municipal court puts them on a payment plan with the private probation company, Judicial Correction Services (JCS), which threatens them with jail time if they do not keep up with the payments—in addition to charging them extra fees that directly profit the company.

JCS contracts with over 100 municipalities in Alabama, according to the Southern Poverty Law Center, a legal organization that is filing the lawsuit on behalf of three clients who entered into payment plans with the company. The center hopes the lawsuit will bring light to JCS’s exploitative practices and deter the other cities from doing any more business with the company.

In August last year, the center had filed a similar lawsuit against JCS and the city of Montgomery, which ultimately resulted in the city signing a settlement agreement promising not to renew its contract with JCS. The Montgomery court will also assess a defendant’s ability to pay when determining court fines, and offer the option of performing community service if they cannot pay.

How Much Does It Really Cost to Fine and Jail the Indigent?

The center is alleging that the city of Clanton and JCS are violating the federal Racketeer Influenced and Corrupt Organizations Act, “to operate a racketeering enterprise that is extorting money from impoverished individuals,” according to the court complaint. The city and JCS are also violating a state law that prohibits courts from charging a probation fee.

In 2012, Roxanne Reynolds, 49, received traffic tickets for a burned out headlight, driving without insurance, and driving with a suspended license. After she missed her court dates because she could not take time off from her new job, Reynolds was arrested in February 2013.

Reynolds spent four days in the county jail, and later appeared for court via video conference. She did not have an attorney to represent her.

To pay JCS, I skipped meals, and didn’t pay bills, so that JCS would get their money first.
— Roxanne Reynolds

After pleading guilty, she was fined $520 for her traffic tickets, $662 for court fees, and $450 for missing her initial court date. When she told the judge she could not afford the over $1600 in fees, the judge told her she could enter into a payment plan with JCS, but failed to explain the plan’s terms or that she was now placed on probation, according to the court document.

Reynolds, who had multiple sclerosis and had to skip work due to the physical pain, struggled to keep up with the $145 per month payment she had to make to pay off her court fees. Every time she came short of the amount, JCS employees threatened her with jail time—but didn’t forget to take a cut of the money.

“To pay JCS, I skipped meals, and didn’t pay bills, so that JCS would get their money first,” said Reynolds via a press teleconference Thursday.

Another plaintiff in the lawsuit, Rodney Ware, 45, filed for bankruptcy in the middle of paying his probation fees to JCS.

The phenomenon of excessive fining is not exclusive to Clanton. In Ferguson, Mo., a recent investigative report by the U.S. Department of Justice found that the city’s police officers routinely stopped residents—most of the time African-Americans—and ticketed them for minor violations. When they didn’t make payments on fines or missed a court hearing, they were arrested and jailed. A federal lawsuit against the city is pending, alleging that Ferguson is running a debtors’ prison for people who cannot pay their traffic tickets.