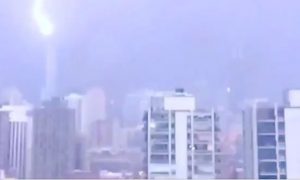 An Alabama teenager tragically died after being struck by lightning on his back porch the afternoon of July 26.

Aron Eugene Dunn, 16, had stepped out onto the porch at about 4:30 p.m. when the lightning struck, Houston County Coroner Robert Byrd told the Dothan Eagle.

“It looks like it ran down the tree, jumped from the tree to him,” Byrd said.

About 30 minutes before, the Houston County Emergency Management Agency had issued a thunderstorm advisory for the area where the lightning struck.

Emergency responders performed CPR at the scene for 15 to 20 minutes before he was rushed to the Southeast Alabama Medical Center where he was pronounced dead, reported the Dothan Eagle.

Shown in a video posted on WTVY, the lightning bolt that killed Dunn left an eerie, blood-red scar on the tree outside the house.

“He was a good student,” recalled Principal Paul Strange of Cottonwood High School in an interview with WTVY. “Teachers really liked Aron. He was well-behaved. He was just a good all-around kid.”

With schools about to open next week, Dunn would have been starting his sophomore year in high school. He is survived by his mother and two brothers. Strange mentioned that the whole community and school was feeling the loss, and that counseling would be available for any students who needed support.

A friend of the family launched a GoFundMe page asking for donations to help the family with Aron’s funeral expenses, with a goal of raising $6,000.

The description on the page reads, “We are trying raise money for Aron Dunn, who, tragically, lost his life suddenly… All proceeds will be donated directly to his mother and family. Please keep them in your prayers and thoughts.”

Data from the National Weather Service shows that the odds of being struck by lightning in any given year is a 1 in 1,083,000 chance, with only 10 percent of those lighting strikes are fatal. Additionally, over the last 30 years the United States has averaged 47 lightning fatalities per year.

Dunn is the second person to die this year in Alabama from a lightning strike.