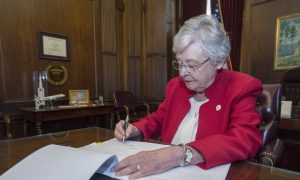 A 22-year-old Alabama reporter was found dead over the weekend, and officials said she died of natural causes.

An official with WHNT, where Ivy Anderson worked, said that she died in her sleep, reported AL.com. Medical tests reportedly won’t be available for 12 weeks.

Anderson began working at the station in January after graduating from the University of Alabama.

“We’re heart-broken to hear this news. She had much more of her life to live and leaves us way too soon,” WHNT News 19 General Manager Stan Pylant said on the station’s website. “Ivy was a rising star and hard-working journalist. Our hearts go out to her family, friends and colleagues. We’re hurting and we are missing her greatly.”

It added that Anderson, a Chattanooga native, celebrated her birthday on Aug. 4.

“Ivy was starting to live her dream—to tell people’s stories, and have her journalism make a difference for those who needed her help,” Paul Caron, WHNT News 19 News Director, said on the website. “She lit up the newsroom with her smile and was admired greatly by all of her colleagues. We’re all stunned and saddened.”

Her colleagues at WHNT offered condolences following her death.

There are some people in life you instantly click with. You get them… they get you. And you always look out for one another.

I was lucky to work with and mentor @IvyAndersonTV

But I was even more lucky to have her as one of my closest friends. pic.twitter.com/PPxkYLSKoU

I will forever admire this girl’s passion. I love you, @IvyAndersonTV. https://t.co/aIbpcdk66r

So grateful I had the pleasure of knowing you and working with you @IvyAndersonTV at WVUA 23. You will be missed tremendously. May your memory be eternal. https://t.co/A4mBU2vCgP

I gave this mug to @IvyAndersonTV on her birthday last Sunday. She was so excited to have a new mug to keep on her desk. While I’m struggling to find strength, I find peace knowing she created and lived a life she loved. ❤ @whnt pic.twitter.com/HUxhF01ng4