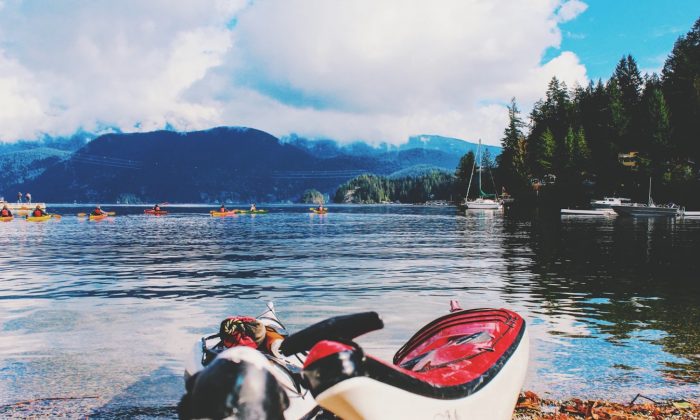 Stock photo of kayaks on a body of water. (Josh Trommel/Unsplash)
US News

An Alabama man was infected with a flesh-eating disease while kayaking on the Tennessee River, his wife said, adding that he was “fighting for his life.”

Cassey Rutherford said in a post on social media that her 41-year-old husband Ricky remains in intensive care at a Florence hospital after being diagnosed last week with necrotizing fasciitis, or flesh-eating bacteria.

‘It Felt Like My Finger Was on Fire’: Man Gardening Without Gloves Contracts Horrifying Flesh-Eating Bacteria

“It was confirmed today by cultures that this is in fact what I told them it was when I brought him to the hospital,” Cassey Rutherford said on July 14, adding, “it is the flesh-eating bacteria!!!”

“My husband is fighting for his life right now because of this horrible thing!” she said. “I was one of those people who thought it would never happen to my family but look where we are now. We are paying the ultimate price!”

In an earlier post, Cassey shared a photo of her husband’s badly infected leg, saying that while the doctor was not convinced it was flesh-eating bacteria, “he did say that he will probably have to have surgery in the very near future because he does have evidence that some of the tissue is dead from the damage of the infection.”

Ok guys sorry it’s been so long for an update but we have been waiting on one ourselves. They finally called in an…

On Friday, July 12, Ricky Rutherford had surgery “to remove a 5-inch by 6-inch piece of his inner thigh,” his wife told WAFF-TV.

The Lauderdale County couple went kayaking July 6 at Second Creek in Waterloo, according to the station. The following day, Ricky Rutherford complained of leg pain and started running a fever. He saw a doctor and then came the terrifying diagnosis—necrotizing fasciitis—a bacterial infection that in extreme cases can lead to death.

“What seemed like a normal fun activity that we enjoyed as a family has turned into a nightmare!” Cassey Rutherford wrote. “My heart is breaking seeing him like this and I wouldn’t want anyone to suffer the same fate!”

In a recent post, Cassey Rutherford wrote that while for a time it was touch-and-go, doctors said her husband is getting better. She said “the surgeon came in a little while ago and told us that he is improving that he is looking great and that hopefully we would only be here another week!”

“Ricky Rutherford has beat the worst of this!” she wrote, adding, “I will never take another day with my family for granted!”

Man Gets Flesh-Eating Bacteria in Gulf Waters and Dies

The case recalls an incident in which a Florida Panhandle woman said her father died after swimming in the Gulf of Mexico from complications following infection with flesh-eating bacteria.

Wiygul told the outlet she thought his sickness initially had something to do with his cancer treatment. She said he developed a large black sore on his back and then his arms and legs broke out in a rash of red lumps.

“Within a few hours of being at the hospital, he had to be in the ICU. He turned septic and went into cardiac arrest,” Bennett Wiygul told the news outlet. “Just within 48 hours of him being in that water he was gone.”

Wiygul explained in detail in a widely shared Facebook post how her father contracted the bacteria that ultimately led to his death.

She said she decided to share her father’s tragic story as a warning to others.

“I am absolutely not trying to scare people from the beach or swimming. I love the water and so did my Dad,” Wiygul wrote. “People do need to know how to be more cautious and how to recognize symptoms. There is information out there but I didn’t find it all until it was too late. I don’t want this to happen to anyone else.”