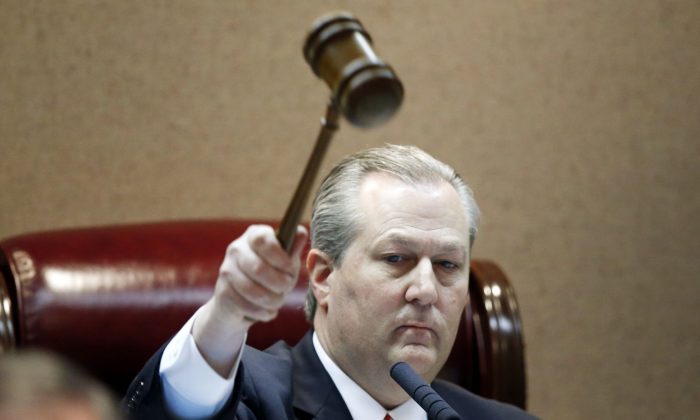 Rep. Mike Hubbard of Auburn, Ala., pounds the gavel to signify the beginning of Alabama legislation's opening, Tuesday, Feb. 2, 2016, in Montgomery, Ala. (AP Photo/Brynn Anderson)
Politics

MONTGOMERY, Ala.—A bill to restrict Alabama cities from setting a higher minimum wage— and roll back Birmingham’s planned increase to $10.10 per hour— won approval in the House of Representatives Tuesday despite a filibuster by Democrats.

Republicans voted to cut off debate after three hours, and representatives approved the bill on a 71-31 vote that fell largely along party lines. The bill now moves to the Alabama Senate.

Alabama has no state minimum wage and uses the federal minimum wage of $7.25. The GOP-backed bill is on the legislative fast track as the city of Birmingham looks to raise theminimum wage to $8.50 an hour on March 1 and then to $10.10 in 2017.

“This bill is not brought to hurt the poor. This bill is to help maintain jobs for all Alabamians and those that make minimum wage. I promise you: I believe this is the right thing for this state,” said bill sponsor Rep. David Faulkner, R-Mountain Brook.

Democrats said that the federal minimum wage keeps families in poverty and Republican legislators were trying to substitute their judgment for local, elected officials who approved the wageincrease.

“Do you realize a man trying to feed a family of four on $7.25 an hour, they are still under the level of poverty? Do you really understand that?” Rep. A.J. McCampbell, D-Demopolis, asked Faulkner.

Rep. Chris England, D-Tuscaloosa, said city voters can oust Birmingham City Council members who approved the raise if they later decide it was a poor decision to raise the minimum wage for all workers within the city limits.

“You can’t have it both ways. We can’t say we are tired of people being on being on public assistance and not get them an avenue or a bridge off of public assistance. You can’t demonize and vilify people who are poor and at the same time eliminate any raise to try to bring them out of poverty,” England said.

Birmingham has been Alabama’s largest city for years and struggled with poverty. Thirty percent of people live below the federal poverty line.

Twenty-nine states and the District of Columbia have state minimum wages above the federalminimum.

Faulkner said he didn’t think Alabama cities had the authority to raise the minimum wage. However, he said he was concerned other cities would follow in Birmingham’s footsteps, setting up an uneven wage landscape that he thought was bad for economic development.

“I want us to be a pro-business state. Those businesses provide jobs for people to live,” Faulkner said.