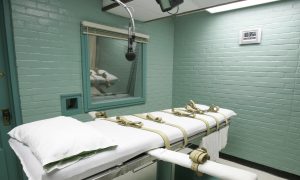 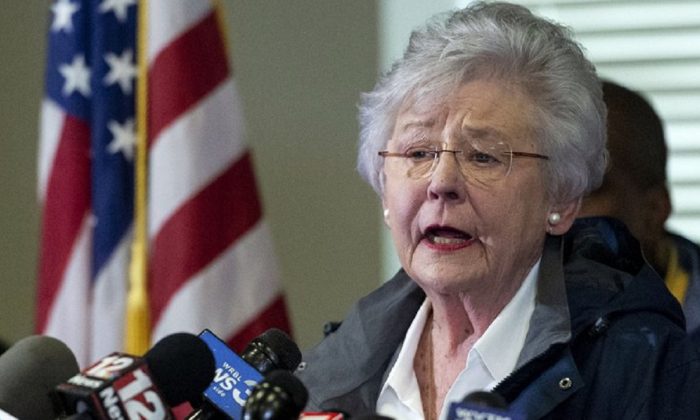 Alabama Gov. Kay Ivey speaks at a news conference in Beauregard, Ala., on March 4, 2019. (Vasha Hunt/AP Photo)
US News

Alabama Gov. Kay Ivey Says She Is Being Treated for Cancer

MONTGOMERY, Ala.—Alabama Gov. Kay Ivey announced Thursday, Sept. 19 that she will receive radiation treatments for a cancerous spot on her lung.

The 74-year-old Republican governor said the spot was discovered in a routine exam and was later confirmed to be what she called a tiny, isolated malignancy. Ivey said she will have an outpatient procedure at the University of Alabama at Birmingham (UAB) on Friday to prepare her to undergo a series of specialized radiation treatments.

“The good news is I am one of the fortunate ones where this was discovered early, and it is very treatable,” Ivey said in a statement.

“Naturally, I welcome your prayers and your support. Just as so many others who have been affected by cancer, I am confident of God’s plan and purpose for my life and feel extremely fortunate this was caught so early.”

Ivey said her doctors have assured her the treatment plan has a high rate of success and will have minimal impact on her schedule. The governor said it will not interfere in her ability to serve as governor and “doing the work you elected me to do.”

The governor announced the diagnosis in a statement and video released by her press office. She said she made the announcement because, “I always shoot straight with you.”

Dr. William P. Saliski Jr. with Montgomery Pulmonary Consultants said Ivey was referred to him to review an abnormal spot on her lung, and a biopsy revealed an isolated malignancy.

“Upon consultation with our cancer team and reviewing all options available, Governor Ivey determined that these minimal radiation treatments are her preference. Governor Ivey has opted for the least invasive treatment which has an excellent cure rate. I expect her to make a full recovery,” Saliski wrote in a statement released by Ivey’s office.

Asked for the specific diagnosis, Ivey press secretary Gina Maiola deferred to statements by the governor and her physician. Maiola said Ivey will continue her duties as governor and will not need to turn the office, even temporarily, over to someone else. Maiola referred to the procedure at UAB only as an outpatient procedure.

Lt. Gov. Will Ainsworth said Ivey will, “carry with her the prayers, thoughts, and well-wishes of millions of Alabamians.”

“Throughout her career, Kay Ivey has proven herself to be a strong and determined woman who will confront any obstacle placed in her path. The courage and tenacity she has shown in the past will serve her well in the challenge that lies ahead,” Ainsworth said.

During the 2018 election, Ivey faced thinly veiled accusations about her age and health. In the GOP primary, some of Ivey’s younger male opponents challenged each other to release their medical records while simultaneously maintaining that they weren’t questioning her health. Ivey typically responded with a quip that perhaps age brings wisdom.