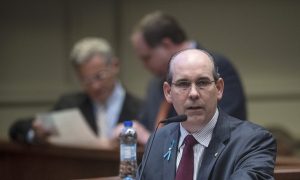 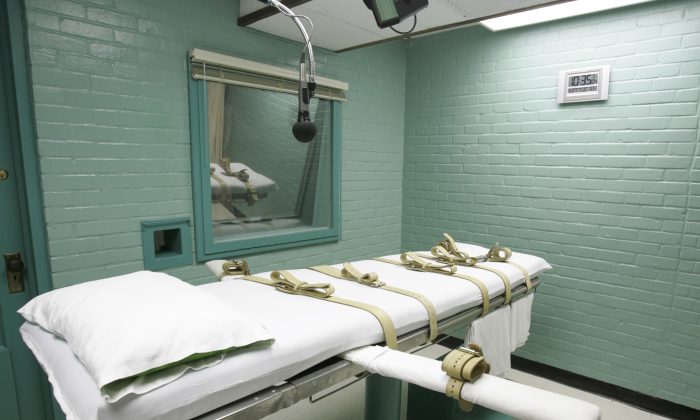 The gurney in Huntsville, Texas, where Texas' condemned are strapped down to receive a lethal dose of drugs is shown on May 27, 2008. (Pat Sullivan/AP Photo)
US News

The state of Alabama executed a man for killing a pastor with a sword in 1991 on May 30 during a robbery attempt.

Christopher Lee Price, 46, was put to death via lethal injection in Holman prison, where he was pronounced dead at 7:31 p.m., CBS News reported.

Price was convicted in the slaying of pastor Bill Lynn. He used a sword and a knife in the attack, which occurred just days before Christmas.

“A man is much more than his worst mistake,” Price said in a statement before his death.

Gov. Kay Ivey said that Price had to be punished for his brutal crime.

“Finally, the loved ones of Pastor Lynn can feel at ease knowing that justice has been administered. I pray that, after all these years later, his family can feel a sense of peace and comfort,” she said, CBS reported.

Lynn’s family also issued a comment about the matter, which was read aloud by an official before Price’s execution. “We are praying to finally have peace,” it read, Fox News reported.

Price was nearly executed in April before the execution warrant expired. Later, the Supreme Court voted 5-4 on May 30 to allow his execution to go ahead.

The prisoner asked to die via nitrogen hypoxia, which kills by depleting the body of oxygen, Fox reported.

Alabama executes Christopher Lee Price for 1991 murder of Fayette County preacher Bill Lynn. Asked of for any final words, Price said “A man is much more than his worst mistake.” https://t.co/HqvxN8HNg9 via @mgmadvertiser

CBS reported that within minutes of the lethal injection, “color soon began draining from his face as additional drugs flowed through an intravenous line.” He was pronounced dead soon after that.

The Alabama Attorney General’s office issued a lengthy statement about the execution.

Read More
Suspect in Grisly Sword Killing Confesses to 6 Other Murders: Reports
Man Who Killed Another With Sword Sentenced to Life Without Parole
Jewelry Store Employees Use Swords to Fight Off Robbers
8-Year-Old Swedish-American Girl Pulls 1,500-Year-Old Sword From Lake in Sweden

Marshall continued: “Christopher Price was put to death at Holman Correctional Facility in Atmore, fighting until the very end to avoid facing the consequences of his heinous crime.”

The official described Price‘s crime and its impact.

“On December 22, 1991, Bill Lynn was wrapping Christmas gifts for his grandchildren when the electricity in his home suddenly went out. Stepping outside to check the power box, Lynn was ambushed, slashed, and stabbed with a sword and knife dozens of times. His killer, Christopher Price, dodged his death sentence for the better part of three decades by employing much the same strategy he has pursued today and tonight: desperately clinging to legal maneuverings to avoid facing his just punishment. In the end, justice got the last word. Tonight, Pastor Lynn’s family can finally begin to seek peace and closure,” the office wrote.

This week, New Hampshire, which hasn’t executed anyone in 80 years and has only one inmate on death row, became the latest state to abolish the death penalty when the state Senate voted to override the governor’s veto.

The Senate vote came a week after the 400-member House voted by the narrowest possible margin to override Republican Gov. Chris Sununu’s veto of a bill to repeal capital punishment.

With New Hampshire’s action, 29 states allow capital punishment, but in four of them, governors have issued moratoriums on the death penalty, according to the Death Penalty Information Center. Twenty-one states have abolished or overturned it.

New Hampshire’s death penalty applies in only seven scenarios: the killing of an on-duty law enforcement officer or judge, murder for hire, murder during a rape, certain drug offenses, or home invasion and murder by someone already serving a life sentence without parole.