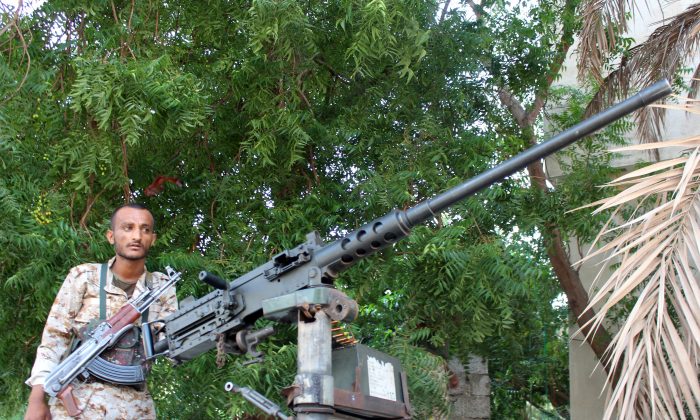 A Yemeni forces soldier stands guard outside the tribunal of the Yemeni governorate of Aden, in the southern Yemeni city of Aden, the government's temporary capital, on Jan. 12, 2016. Aden has seen a growing jihadist presence, with Al-Qaida in the Arabian Peninsula (AQAP), long active in Yemen, and the Islamic State (ISIS) apparently vying for influence. (Saleh al-Obeidi/AFP/Getty Images)
Middle East

SANAA, Yemen—Al-Qaida’s Yemeni branch seized another town on Monday, setting up checkpoints at its entrances and besieging government buildings before dawn after days of fighting with southern separatists, officials said.

The capture of Azzan marks the latest advance for al-Qaida in the Arabian Peninsula, or AQAP, which has exploited the chaos of Yemen’s civil war to expand its reach. The security officials spoke on condition of anonymity because they are not authorized to brief reporters.

The group captured the southern port city of Mukalla last year and has seized a number of towns as it has moved west toward Yemen’s second city of Aden, where the internationally backed government is based.

Yemen’s conflict pits a loose array of government-allied forces against the Shiite Houthi rebels and troops loyal to a former president. A Saudi-led and U.S.-backed coalition have intervened on the government’s side, but the Houthis and their allies still control the capital, Sanaa, and much of the north.

The al-Qaida affiliate has clashed with the Houthis, but the areas it has captured are under the government’s nominal control. An Islamic State affiliate has also emerged in recent months, carrying out a series of attacks on Shiites and government officials.

Azzan, with a population of 50,000, is at a crossroads between Aden and the oil and gas-rich Hadramawt province, of which Mukalla is the capital. Officials and witnesses say al-Qaida has a presence inside Aden as well, where it has set up training camps and smuggling operations in the city’s port.

Washington has long viewed AQAP as the global network’s most dangerous branch. It has been linked to several attempted attacks on the U.S. homeland and claimed responsibility for the attack on a satirical French magazine’s Paris offices a year ago, which killed 12 people.