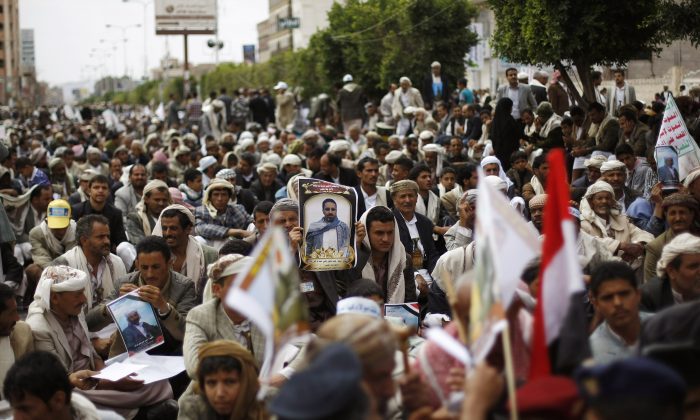 A mourner, center, holds a poster of a man who was killed Thursday by a suicide bomber in central Sanaa, Yemen, Tuesday, Oct. 14, 2014. Two suicide bombings in Yemen killed nearly 70 people last Thursday, with one targeting an anti-government rally by followers of the Houthi Shiite group, who control Sanaa. (AP Photo/Hani Mohammed)
Middle East

SANAA, Yemen—Yemen’s Shiite rebels pushing to seize more territory across the country were locked in fierce battles with al-Qaeda militants on Wednesday in a province south of the capital, Sanaa, security officials said.

The clashes add another layer to the turmoil gripping this impoverished Arab nation struggling in the face of an ongoing blitz by the Shiite Houthi rebels, relentless political upheavals and a rampant al-Qaeda-led insurgency by Islamic militants.

The fighting between the Houthis and al-Qaeda militants erupted late on Tuesday and continued into Wednesday in the town of Raad in Baydah province, the security officials said, speaking on condition of anonymity in line with regulations. Initial reports indicated that five rebels and six al-Qaeda militants were killed in the fighting, they said. Thousands of residents have fled the town to escape the violence.

The Shiite Houthis, who are suspected of being linked to predominantly Shiite Iran, on Tuesday captured Damar province, also south of Sanaa, and the key Red Sea port city of Hodeida west of the capital.

Al-Qaeda’s Yemeni branch, described by Washington as the world’s most active offshoot of the terror network, has vowed to fight the Houthis. It has claimed responsibility for a suicide bombing last week in Sanaa that killed at least 51 people, mostly Houthis on their way to attend an anti-government rally.

The Houthis overran Sanaa in September and are also in full control of the provinces of Saada and Omran north of the capital.

Yemen has been beset for years by an al-Qaeda-led insurgency that has staged dozens of suicide attacks against military and security personnel. The country has endured crushing poverty that has bred resentment — and outright rebellion — that took root in a secessionist movement in its once-independent southern region.

The advances by the anti-American Houthis come in a country that is a centerpiece in the U.S. campaign against al-Qaeda’s leaders, hideouts and camps, often with drones. Its proximity to the vast oilfields of Washington’s Gulf Arab allies also adds to Yemen’s strategic value. Analysts say the Houthis may be building on the momentum gained from their recent battlefield successes to seize more territory.

On Wednesday, Yemeni security officials said four suspected al-Qaeda militants were killed when a rocket fired by a drone struck their vehicle in southern Shabwa province, an al-Qaedastronghold. The identities of the four were not immediately known, and it wasn’t clear if there were any senior operatives among them.

Meanwhile, in the southern port city of Aden, thousands held a sit-in protest for a second day Wednesday at a major square to press demands for the south to secede. Once-independent Southern Yemen was united with the north in 1990. An attempt to break away from the union in 1994 was ruthlessly crushed by the army of former President Ali Abdullah Saleh. The protest is scheduled to end on Thursday.