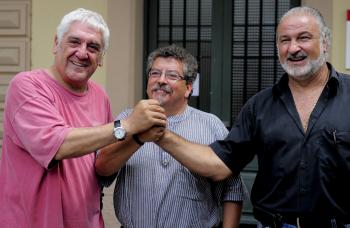 President of humanitarian group Barcelona Accio Solidaria Josep Carbonell (R), director Francesc Osan (C) and spokesman Josep Ramon Gimenez (L) celebrate in Barcelona on August 23, 2010 after receiving news that two of the organization's aid workers who have been held hostage by an Al Qaeda offshoot for almost nine months have been released in Mali. Albert Vilalta and Roque Pascual were freed after a ransom payment was made, according to unconfirmed media reports. (Josep Lago/AFP/Getty Images)
Africa

Annie Wu
Annie Wu joined the full-time staff at the Epoch Times in July 2014. That year, she won a first-place award from the New York Press Association for best spot news coverage. She is a graduate of Barnard College and the Columbia University Graduate School of Journalism.
View profile
Follow
biggersmaller
Print
Two hostages kidnapped last November by al-Qaeda members in the Islamic Maghreb (AQIM) were released in Mali and on their way back to Spain, the Spanish government said.

Roque Pascual and Albert Vilalta were aid workers from a Catalan non-governmental organization called Barcelona Acció Solidària (Barcelona Solidarity Action). They were kidnapped in North African nation Mauritania while delivering supplies to poor villagers, according to the Associated Press.

“This has been 268 days of suffering for them and their families,” Spanish prime minister José Luis Rodríguez Zapatero said in a press conference on Monday. Pascual and Vilalta were the longest-held hostages by al-Qaeda in the Sahara.

Their female colleague Alicia Gamez was also kidnapped but was released in March.

The hostages were released days after Omar Ould Sid Ahmed Ould Hama, a Malian who was captured and sentenced to 12 years imprisonment for the kidnapping by a Mauritanian court, was extradited back to his home country on August 15.

The hostages were set free in Mali and are currently en route to Ouagadougou, the capital of nearby Burkina Faso, where they will board a flight back to Spain. They are expected to arrive in Spain Monday night, according to Barcelona Acció Solidària representative Francesco Osan.

In recent years, Mali has become one of al-Qaeda’s strongholds in North Africa, particularly after the Algerian militant group, the Salafist Group for Preaching and Combat (GSPC), joined hands with al-Qaeda in 2007 and formed AQIM, reported BBC.

Last month, AQIM said they killed Michel Germaneau, a French hostage whom they kidnapped in Niger in April.

French and Mauritanian troops attempted to rescue him in a cross-border raid, but failed. British hostage Edwin Dyer was also killed in 2009 after the British government refused to agree to AQIM’s demands.