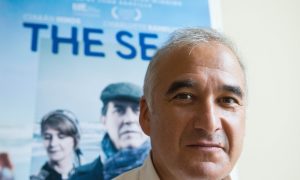 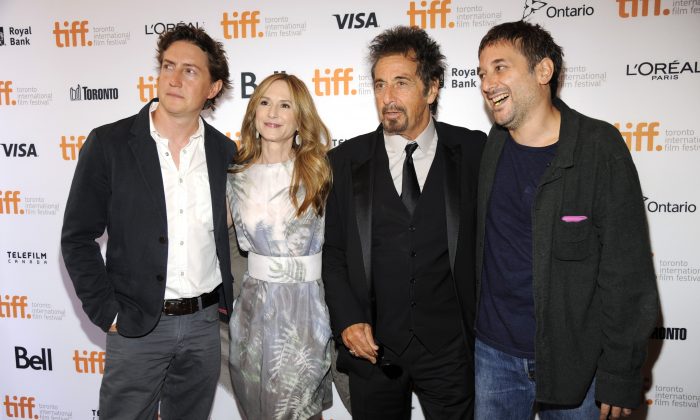 David Gordon Green, and from left, Holly Hunter, Al Pacino and Harmony Korine arrive at the premiere of "Manglehorn" on day 3 of the Toronto International Film Festival at the Winter Garden Theatre on Saturday, Sept. 6, 2014, in Toronto. (Photo by Chris Pizzello/Invision/AP)
Canada

TORONTO—Excited about telling the story of how he met his co-star Harmony Korine, Al Pacino, knocked over a glass of water during the press conference for “Manglehorn” at the Toronto International Film Festival (TIFF) on September 7, 2014.

The mishap would have been overlooked except for the fact that the director for “Manglehorn,” David Gordon Green, who sat next to Pacino had just knocked over a glass of water a minute prior.

Soon after, Pacino got up with the rest of the cast including Holly Hunter and Harmony Korine, and knocked over the remaining glasses of water on the table, in front of a room full of laughing reporters.

“They destroyed the press conference,” Pacino said jokingly, referring to the hearsay that would circulate after. As organizers carried in napkins, Pacino started wiping the table, while talking about how much he likes to talk.

“Giving the actor something to do…” Pacino said while wiping the table. “Come again please, my home is open to you,” Pacino said jokingly.

“Manglehorn” is a western drama set in Texas about a locksmith who has a hard time letting go of his first love. While he didm’t initially see himself playing the lead role in “Manglehorn,” Pacino said that Green had faith in him and encouraged him in his role. As an actor, it helps Pacino that at least someone on the film project is his fan and can offer support.

“Francis Coppola wanted me in ‘The Godfather,'” Pacino said.

“There was something in my person that he saw,” Pacino said, adding that this was definitely the case with Green.

The veteran actor said he definitely deserves his next Academy Award, while joking about the fact that he’s always on the red carpet.