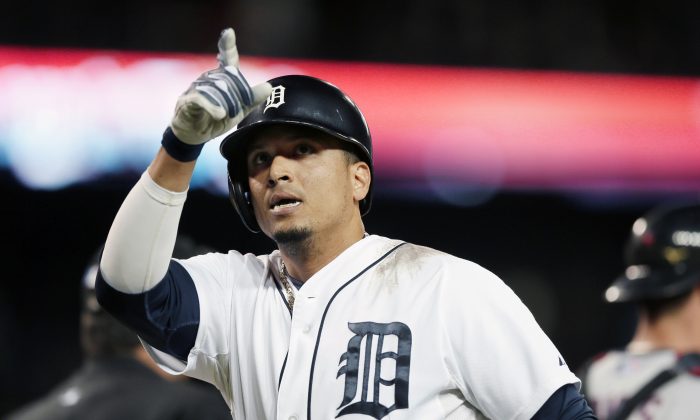 FILE - In this Sept. 13, 2014, file photo Detroit Tigers designated hitter Victor Martinez points to the stands after his solo home run during the fourth inning of a baseball game against the Cleveland Indians in Detroit. A person with knowledge of the deal says the Tigers have agreed to a $68 million, four-year contract with slugger Victor Martinez. The person spoke on condition of anonymity to The Associated Press because the agreement has not been announced. (AP Photo/Carlos Osorio)
Baseball

It’s hard to label the Tigers’ four-year run as division champs a dynasty, or even a mini-dynasty, as they haven’t won the big one yet. But they have dominated the division with the best hitter (Miguel Cabrera) as well as the best starting rotation in the American League over these last four years. I think it’ll reach five in 2015. Stay tuned.

1. Detroit Tigers: We can’t sugarcoat the Tigers’ offseason. But though they lost former Cy Young winner Max Scherzer to free agency, they still have considerable talent. For one thing, Scherzer was one of three former Cy Young Award starters in their rotation, along with David Price and Justin Verlander, who has too much pride not to rebound from a poor 2014. They also should have shortstop extraordinaire Jose Iglesias ready to go (after missing all of 2014), which would shore up their weakest link—infield defense. Although injuries to Miguel Cabrera (ankle) and Victor Martinez (knee) are ongoing, both are possibles for Opening Day. And if they miss some time in April, it’s a small price to pay to have them ready for the rest of the season.

2. Cleveland Indians: True, the Indians are saddled with the contracts of the no-longer-speedy Michael Bourn and the no-longer-can-hit Nick Swisher, but there’s plenty else to like in Cleveland. Jason Kipnis, who hit just .240 during last year’s injury-riddled season, should rebound this year, while Brandon Moss, acquired from Oakland, should be a big boost to the lineup.

True, the Indians are saddled with the contracts of the no-longer-speedy Michael Bourn and the no-longer-can-hit Nick Swisher, but there’s plenty else to like in Cleveland.

On the mound, surprising 2014 Cy Young winner Corey Kluber (remember him?) returns as do promising youngsters Trevor Bauer, Danny Salazar, and T.J. House, who should form a good starting rotation. Outfield defense might be a problem with the aging Bourn in center.

3. Kansas City Royals: It wasn’t a great offseason for the Royals, who lost a significant part of their newfound nucleus when James Shields bolted for San Diego. Their saving grace is that they still have a good, but young, nucleus remaining. After losing Shields, Billy Butler, and Nori Aoki to free agency, they replaced them with free agents Edinson Volquez, Kendrys Morales, and Alex Rios but smartly kept them all to one- or two-year deals. If corner infielders Eric Hosmer and Mike Moustakas continue the great postseasons they had into the 2015 regular season, the Royals could be even better.

4. Chicago White Sox: The White Sox did well this past offseason in getting Jeff Samardzija from the A’s for some mid-level prospects. He should pair with Chris Sale to give the team a formidable 1-2 combination. After those two, there are some rotation question marks though. They did cap off a good offseason by signing one of the better hitters on the market in Melky Cabrera as well as closer David Robertson. Cabrera will have to make up for the loss of Adam Dunn, whose patience and prodigious power was a pitcher’s nightmare.

5. Minnesota Twins: It’s no surprise that the Twins are last here. Joe Mauer was so good for so long, but all his $23 million salary (roughly 20 percent of their payroll) got them last year was a .277 hitter with little power (4 homers in 120 games) while no longer playing the premium position, catcher, he once did. At 31, and with a lot of games at catcher under his belt, he’s not likely to find the fountain of youth, either. They did sign Ervin Santana to a four-year deal and extended Phil Hughes through 2019, but they’re currently waiting for a talented farm system to graduate several prospects to the major league team.