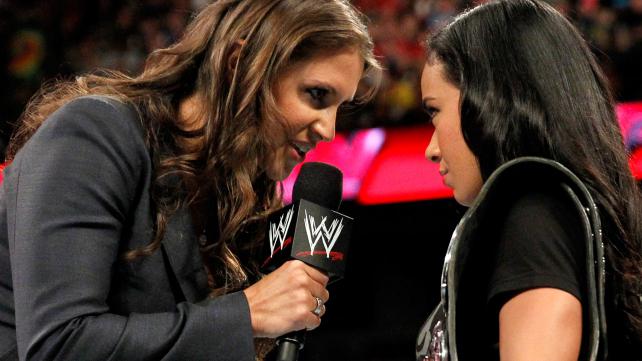 WWE has teased a potential matchup between AJ Lee and Stephanie McMahon.

Lee is slated for a Triple Threat matchup at Night of Champions but McMahon could interfere somehow, especially considering Nikki Bella is involved.

“I am a woman who knows how to get exactly what she wants,” a mashup video posted on the league’s website shows Lee saying. “There’s not a woman in that locker room who is as strong as I am.

“AJ, please remember, I can take all of that away from you,” Stephanie says.

“I am a fourth generation McMahon, and what are you, who are you, you’re nothing.”

“I worked my entire life to get here,” Lee asserted.  “I am you, only younger.”

“You do not mess with a McMahon,” Stephanie said.

“You will never be able to touch me.”

“I am going to tear your heart out.

The league’s website said: “There’s only room for one queen in the kingdom of WWE, but two women think they hold the crown. If Stephanie McMahon and AJ Lee were to battle for that spot, what would happen?”

Out of 438 votes so far, 77 percent of people said they think Lee would win if she and McMahon did end up squaring off.