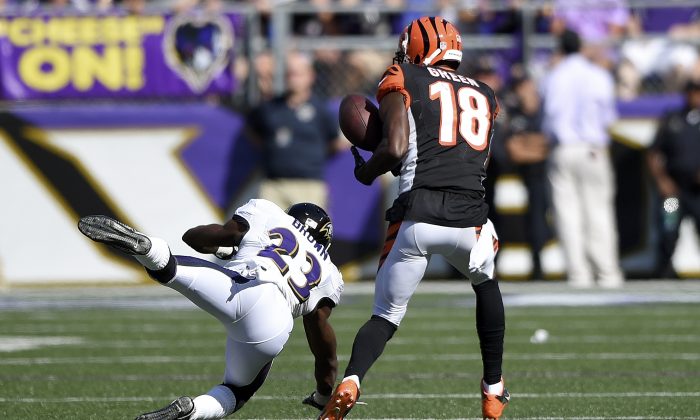 Green appeared to suffer the injury in the first quarter.

Reports say that he had a toe injury.

It’s unclear if he’ll return to the game.

NFL endures one of its worst weeks ever

This has been the NFL’s worst week.

In the span of five days, America’s favorite sport bombarded fans with a video of one player punching his wife, details about a former MVP hitting his son with a tree branch, reminders of two more lingering domestic violence cases — all being overseen by a commissioner, Roger Goodell, who has looked ill-suited to handle any of it.

Friday also brought news that speaks to the oversized violence of the game: One story about a study that showed nearly three in 10 ex-players face Alzheimer’s or moderate dementia; and another about the long-awaited implementation of a policy to test for human growth hormone.

Both those items might have been front-page news some weeks. Instead, they were virtual afterthoughts, while a sampling of some of headlines read: “Goodell’s Watergate,” ”Goodell Shows Again that the NFL has Sold its Soul,” ”Protect the Shield or Cover His Butt?”

“As unusual a week as I can remember in 40 years around the NFL,” agent Leigh Steinberg said. “What should have been as positive a week as they have, with opening weekend and a lot of good games, turned into a destructive minefield of negativity.”

On Sunday, games will continue with players hitting the field and satiating America’s thirst for its weekly dose of league-sanctioned, bone-jarring violence. The games themselves will offer a break of sorts from the all-too-disturbing mayhem the league served up Monday through Friday.

On Monday, TMZ released a video of Ravens running back Ray Rice punching his fiancee in an elevator, prompting Goodell to go beyond the league’s new, hastily reworked domestic-violence policy and suspend Rice indefinitely.

On Friday, Vikings running back Adrian Peterson was charged with child abuse for using a switch to discipline his son.

In between, Goodell’s reputation has been savaged in part because of his claim he hadn’t seen the Rice video until this week, even though The Associated Press reported the video had, indeed, been sent to the NFL in April.