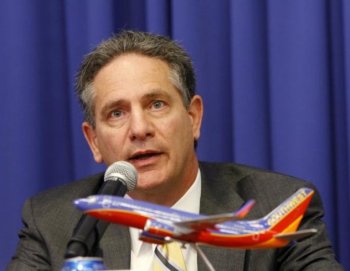 With the merger, Southwest will gain AirTran's hub in Atlanta's Hartsfield-Jackson International Airport—the busiest airport in the world—as well as access to some of the most popular destinations in the Northeastern United States, including Washington's Ronald Reagan National Airport, Boston's Logan Airport, and New York's LaGuardia Airport.

The cash and stock offer of $1.4 billion includes assumption of AirTran's debt. The combined company will have around 100 million customers and serve more than 100 airports.

“The acquisition of AirTran represents a unique opportunity to grow Southwest Airlines' presence in key markets we don't yet serve and takes a significant step toward positioning us for future growth,” Gary Kelly, Southwest's CEO, said in a statement on Monday.

“It presents us [with] the opportunity to extend our service to many smaller domestic cities that we don't serve today, and provides access to key near-international leisure markets in the Caribbean and Mexico. Finally, this accelerates our goal to boost profits and achieve our financial targets,” he continued.

Southwest Airlines's expansion into Atlanta, alone, has the potential to gain over 2 million new passengers and over $200 million in consumer savings annually, according to analysis by Campbell-Hill Aviation Group, LLP.

The acquisition also gives Southwest access to the lucrative Southeast U.S. vacation market—including Florida—as well as service to the Caribbean.

What It Means for Consumers
Current AirTran customers will benefit from the deal, experts say, as Southwest will likely end many of AirTran's fees the airline currently charges its customers, such as the checked-in baggage fee.

“Southwest and Airtran don't have much route overlap, so the merger in and of itself won't lead to higher fares,” said George Hobica of airfarewatchdog.com. “But both airlines offer aggressive airfare sales almost weekly. We'll see fewer of these, and fares will inch up.”

Analysts say that the merger will increase pressure on Delta Airlines, currently the biggest tenant in Atlanta and has a large footprint in the Northeast market. It now faces much stronger competition from its expanding rival, Southwest.

In the short term, the move will likely force Delta, as well as the newly combined United-Continental behemoth, to lower fares as Southwest now has expanded its service and route network to better compete with the bigger carriers.

Integration Issues
The merger presents some challenges to Southwest.

While both carriers are discount providers, Southwest does not charge for carry-on luggage while AirTran does. In addition, Southwest's business model stipulates that passengers board the plane on a first-come, first-served basis without assigned seating. AirTran employs a traditional seating model and passengers are allowed to choose their seats prior to boarding, and it has business-class seating on certain flights, which Southwest does not.

The acquisition will give Southwest an additional model of aircraft—Boeing 717—as currently Southwest only operates Boeing 737 aircraft so each pilot can also fly any other plane in the network.

The airlines said that total value of the deal—excluding debt and operating leases—amounts to $3.4 billion.