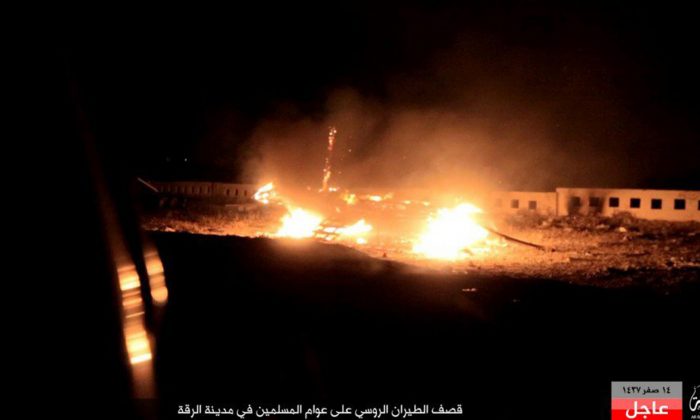 Cars burning after Russian airstrikes that targeted civilian areas, in Raqqa, Syria, on Nov. 27, 2015. A new wave of airstrikes targeting the Syrian city of Raqqa, the headquarters of the extremist Islamic State and the focus of an international military campaign, killed several people, including children, Syrian opposition groups said Friday. The Arabic caption on the bottom picture reads:"Russian airstrikes on the Muslims in Raqqa City." (Militant Amaq news agency via AP)
Middle East

The Britain-based Syrian Observatory for Human Rights said 15 blasts shook the northern and eastern outskirts of Raqqa on Sunday, killing 32 ISIS fighters and wounding more than 40.

A Raqqa-based activist group that reports on ISIS, known as Raqqa is Being Slaughtered Silently, said warplanes struck ISIS positions on the edge of the city. It had no word on casualties.

RBSS did not say which country carried out the airstrikes while the Observatory said they are believed to be from the U.S.-led coalition that began targeting ISIS in Syria in September 2014.

A Facebook page used by ISIS supporters said the airstrikes were carried out by Russian warplanes on the outskirts of Raqqa and killed 15 people, including eight children and five women. It said 25 people were wounded in the airstrikes.

Airstrikes on Raqqa have intensified after last month’s attack in Paris that killed 130 people and the Oct. 31 crash of a Russian passenger plane in the Sinai Peninsula that killed all 224 people on board, nearly all of them Russians. Russia said the plane was downed by a bomb. ISIS claimed responsibility for both attacks.

Russia and a U.S.-led coalition that includes France have been pounding Raqqa.

Also Sunday, a Syrian businessman that the U.S. Treasury Department sanctioned last month, saying he serves as a middleman for oil purchases by the Syrian regime from ISIS, denied the charges against him.

The U.S. Treasury Department sanctioned four individuals and six entities for providing support to the Syrian government. As a result, the U.S.-based assets of those individuals and entities are frozen, and Americans are generally prohibited from engaging in transactions with them.

George Haswani, co-owner of HESCO Engineering and Construction Co., a major engineering and construction company in Syria, told The Associated Press in Damascus that the accusations are not true “simply because the oil pipeline is out of service and is damaged in more than 60 points.”

“These huge amounts of oil can’t be transported except via convoys of tankers,” Haswani said. “I challenge (the U.S.) to unveil any document or show images of tankers heading to areas under the control of the Syrian government.”

Earlier this year, the European Union imposed sanctions on Haswani, also accusing him of helping the Syrian government buy oil from ISIS.