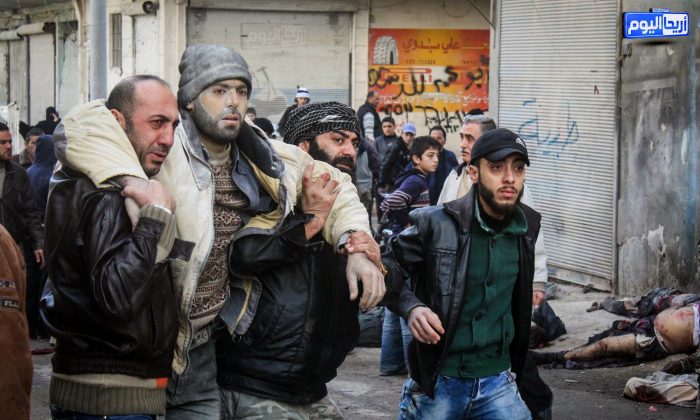 In this photo provided by the Syrian anti-government activist group Ariha Today, which has been authenticated based on its contents and other AP reporting, Syrian citizens help an injured man after airstrikes believed to be carried out by Russian warplanes in the center of Ariha town in the northwestern province of Idlib, Syria, Sunday, Nov. 29, 2015. (Ariha Today via AP)
Middle East

The market in the village of Maaret al-Naasan mostly sells diesel fuel brought from areas under the control of the Islamic State group. The airstrikes are likely part of a campaign to target the oil industry that is a major source of income for ISIS. The extremist group controls nearly half of Syria.

Russian warplanes as well as those of the U.S.-led coalition have destroyed hundreds of tanker trucks that are used to ferry oil from fields under the control of ISIS in eastern Syria to other parts of the country. The warplanes have also struck oil facilities in the eastern province of Deir el-Zour in recent weeks.

The Local Coordination Committees said Tuesday’s airstrikes on Maaret al-Naasan were carried out by Russian warplanes and that they killed and wounded dozens of people.

Rami Abdurrahman, who heads the Britain-based Syrian Observatory for Human Rights, said the airstrikes killed and wounded at least 35 people. He said the warplanes were believed to have been Russian.

“This is part of the campaign against Daesh,” Abdurrahman said, using the Arabic acronym for the Islamic State group.

Although other insurgent groups in Syria have been fighting against IS, fuel has been flowing from areas controlled by the extremists into rebel-held territory in return for other commodities such as vegetables and fruits.

Demand for diesel has been on the rise in northern Syria to fuel heaters during the winter; the attacks on oil facilities and tanker trucks have sharply increased the price of diesel.

Hezbollah is an ally of Syrian President Bashar Assad and has sent thousands of fighters into Syria to back Assad’s forces.