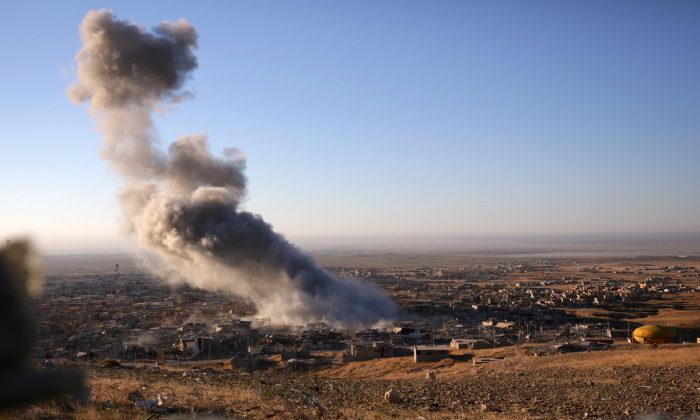 Smoke believed to be from an airstrike billows over the northern Iraqi town of Sinjar on Thursday, Nov. 12, 2015. (AP Photo/Bram Janssen)
Middle East

BEIRUT— A new wave of airstrikes targeting the Syrian city of Raqqa, the headquarters of the extremist Islamic State (ISIS) and the focus of an international military campaign, killed at least eight people, including five children, Syrian opposition groups said Friday.

The strikes came as France’s foreign minister, Laurent Fabius, declared that destroying the ISIS headquarters and “neutralizing and eradicating” the extremist group is the main objective of the international campaign.

It wasn’t immediately clear who carried out the latest airstrikes. The city in northern Syria is the group’s de facto capital and has become the focus of international airstrikes in the wake of the Paris terror attacks and the bombing of a Russian jetliner over Egypt’s Sinai Peninsula. ISIS has said it was behind both attacks.

Those developments have turned the world’s attention to the fight against ISIS at a time when the international community is trying to engage Syrians in a diplomatic process that would lead to a political transition in the war-ravaged country.

That process faces enormous hurdles, including the fate of President Bashar Assad and agreeing on which armed factions in Syria should be allowed to take part in negotiations.

Speaking in Moscow at a joint news conference with the Syrian foreign minister Friday, Russian Foreign Minister Sergey Lavrov said Friday that peace talks for Syria cannot go ahead until all parties involved agree on a list of which groups should be listed as terrorist and which as legitimate opposition.

“Vienna talks cannot go ahead productively without such a list of terrorists and a list of opposition groups,” Lavrov said, adding that the lists should be vetted by the U.N. Security Council.

Syrian Foreign Minister Walid al-Moallem scoffed at those who call on Assad to step down, comparing them to “those who dream of the devil in heaven.”

“All those who demanded the resignation of Assad have left and Assad remained,” he said, adding that elections will decide who stays and who goes.

Al-Moallem also seized on comments made by Fabius Friday in which he suggested France could work with Syrian government forces to fight ISIS.

“Better late than never,” al-Moallem said. “The Syrian army is ready to collaborate with anyone who has the intention to fight terrorism in Syria,” he said, adding that first France would have to change its whole take on the Syrian crisis.

Fabius later clarified his comments, saying such cooperation must be part of a political transition in which Assad would step down.

A Raqqa-based activist group that reports on ISIS, known as Raqqa is Being Slaughtered Silently, said Friday that most of the casualties in the latest aerial bombardment occurred when warplanes targeted the city’s Heten School. The school, like others in Raqqa, has been taken over by ISIS.

The Syrian Observatory for Human Rights put the death toll at 12, including the five children. Conflicting casualty figures are common in the chaos of Syria’s civil war, now in its fifth year.

Russia and a U.S.-led coalition that includes France have been pounding Raqqa.

An ISIS-affiliated agency, Aamaq, published a video purporting to show nighttime explosions that lit up the Raqqa sky. The video showed a building and several cars on fire, and a man crouching over the bodies of five children. The agency claimed the casualties and destruction were caused by Russian airstrikes that targeted civilian areas.

In an interview with RTL radio, Fabius said that destroying ISIS is an objective that all countries agree upon. He spoke after a week of intense diplomacy capped by the French president’s meeting with Russian President Vladimir Putin.

Francois Hollande has been on a diplomatic drive since the Paris attacks to increase cooperation in tackling ISIS, which holds large swathes of territory in both Syria and Iraq. The extremist group claimed responsibility for the downing of a Russian passenger plane over Egypt, when all 224 people onboard were killed, as well as the Nov. 13 attacks in Paris that killed 130 people.

Fabius said Putin agreed on the need to focus international efforts against the extremist group and that France is drawing up a map of other, moderate groups, to protect them from warplanes.

He also said the international coalition is focusing on oil convoys from the group’s territory, which provide a crucial source of income. He said some of the trucks head toward Turkey, and France believes Syrian leader Bashar Assad is also a buyer — a charge the Syrian government has denied.