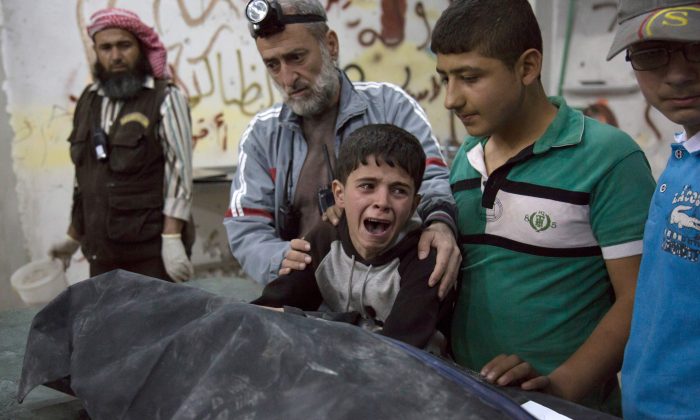 A Syrian boy is comforted as he cries next to the body of a relative who died in a reported airstrike on April 27 in the rebel-held neighbourhood of al-Soukour in the northern city of Aleppo. (Karam Al-Masri/AFP/Getty Images)
Middle East

A series of airstrikes and shelling has left more than 60 people dead in less than 24 hours in the city of Aleppo in Syria on April 28.

At least 27 people died in a hospital run by Doctors Without Borders (MSF) and the International Committee for the Red Cross. Buildings nearby were struck overnight in the rebel-controlled part of Aleppo.

An estimated 200 civilians have been killed in the past week in Syria, almost half of them around Aleppo. There has also been shelling in Damascus, along with a car bombing, which is rare in the capital of the country. The Red Cross said the fighting, including the airstrikes’ destruction of a key hospital in Aleppo, is putting millions at grave risk.

The hospital supported by MSF and Red Cross, located in the district of Sukkari, was hit shortly before midnight April 27, according to opposition activists and rescue workers. Six Al Quds Hospital staff and three children were killed. The facility has been one of the main medical centers in the city since Aleppo became divided in 2012.

The Syrian Civil Defense, known as the White Helmets, a volunteer first-responders agency whose members responded to the scene of the attack, said 30 were killed there, including six hospital workers. The medical center was the area’s main pediatric care center.

Footage posted online by the White Helmets showed numerous dead bodies being pulled out of debris, including those of children, who were pulled out of a building and transported in ambulances as screams and cries filled the air. The video also shows distraught rescuers trying to keep bystanders away, fearing more airstrikes.

One of the last pediatricians remaining in opposition-held areas of Aleppo and a dentist were both killed in the attacks.

“Where is the outrage among those with the power and obligation to stop this carnage,” asked Muskilda Zancada, MSF head of Syria mission.

#MSF #Syria Head of Mission Muskilda Zancada: Where is the outrage among those with the power & obligation to stop this carnage? #notatarget

The White Helmets said the hospital and nearby buildings were hit in four consecutive airstrikes and people were still trapped under the rubble, while rescuers frantically tried to save them. On Twitter, the rescue group said more than 10 air strikes had hit Aleppo in the morning.

Meanwhile, the MSF said at least 14 patients and employees were among those killed, with the toll expected to rise, and that the hospital was “hit by direct airstrike.” A Syrian military official denied that claim. Russian defense also denied reports that its planes had hit the hospital, according to Reuters.

A little after midday, another series of airstrikes in rebel-controlled areas killed at least 20 people in two neighborhoods, the White Helmets and the Syrian Observatory for Human Rights said.

Activists uploaded videos showing dust rising up from buildings on fire and people running away from falling houses. Footage also shows children crying, looking for their families. Another scene shows a man pulling his daughter out of the rubble.

Aleppo is now one of the main battlefields in the devastating Syrian civil war—with a failed cease-fire and peace talks on hold in Geneva. The UN envoy for Syria called on the United States and Russia to revive peace discussions and a cease-fire on the day of the attacks.

But the violence only grew. State media reports said at least 1,000 mortars and rockets were fired killing at least 14 civilians.

The chief Syrian opposition negotiator, Mohammed Alloush, condemned the government of President Bashar Assad for the violence and denounced the attacks as an attempt by the dictator’s regime to drive out the residents of Aleppo, labelling it “a crime of ethnic and sectarian cleansing.” He said the airstrikes were the latest “war crimes” of Assad’s government.

“Whoever carries out these massacres needs a war tribunal and a court of justice to be tried for his crimes. He does not need a negotiating table,” Alloush said, “Now, the environment is not conducive for any political action.”