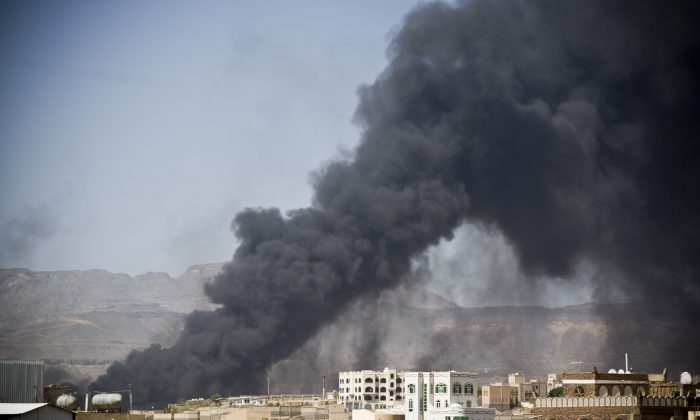 Smoke rises after a Saudi-led airstrike hit a site believed to be a munitions storage, in Yemen's capital, Sanaa, on Tuesday, May 12, 2015. (AP Photo/Hani Mohammed)
Middle East

SANAA, Yemen—Saudi-led airstrikes targeting Shiite rebels and allied forces destroyed historic houses in the Old City of the capital, Sanaa, a UNESCO world heritage site, killing at least five civilians and burying others under the rubble.

Warplanes dropped missiles early Friday morning. While the missiles apparently didn’t explode, their impact destroyed at least three houses and caused cracks in surrounding houses which are cemented to each other. The houses are one of the most popular and historic tourist attractions in the city.

Online activists posted pictures from the damaged portion of the city, next to men digging for survivors from under the debris.

The Saudi-led coalition began conducting airstrikes on March 26 against Shiite rebels and their allies in the Yemeni security forces who had overrun the capital.