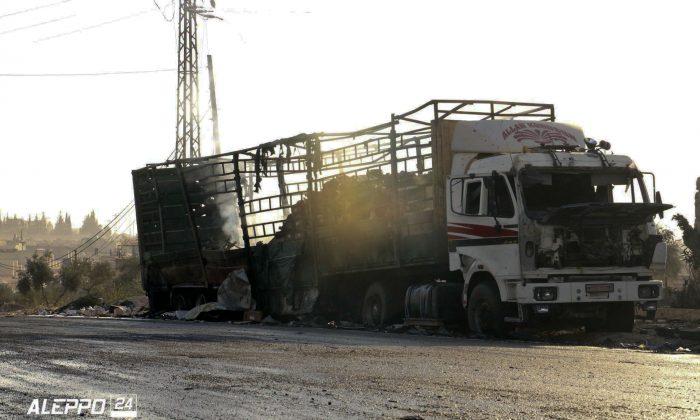 FILE - This Tuesday, Sept. 20, 2016, image provided by the Syrian anti-government group Aleppo 24 news, shows a vest of the Syrian Arab Red Crescent hanging on a damaged vehicle, in Aleppo, Syria. A U.N. humanitarian aid convoy in Syria was hit by airstrikes Monday as the Syrian military declared that a U.S.-Russian brokered cease-fire had failed, and U.N. officials reported many dead and seriously wounded. (Aleppo 24 news via AP)
Middle East

The team had just arrived at the scene of the first airstrike in the rebel-held town of Khan Touman when planes circled around and struck the area again, Dr. Oubaida Al Moufti, vice president of the International Union of Medical Care and Relief Organizations, said.

Syrian government forces have been accused of carrying out “double tap” attacks throughout the 5-1/2 year war, placing paramedics and rescue workers in peril.

The organization, known by its French initials UOSSM, had initially said that the Tuesday night strike leveled a medical triage point it operates in rebel-held territory outside the contested city of Aleppo.

The Britain-based Syrian Observatory for Human Rights said at least 13 people were killed in the attack, including nine militants, some of them belonging to the Fatah al-Sham Front, an al-Qaida-linked group previously known as the Nusra Front.

It was not immediately clear who carried out the strike. Aircraft from Syria, Russia and the U.S.-led coalition are targeting the Fatah al-Sham Front, which along with the ISIS terrorist group was excluded from a weeklong cease-fire.

UN Suspends All Convoys in Syria After Attack on Aid Trucks

The incident fueled tensions between the two architects of Syria’s cease-fire, Russia and the United States. Washington said it believed Russian or Syrian government jets were behind the attack that killed 20 civilians, and that either way it held Russia responsible because under the truce deal Moscow was charged with preventing airstrikes on humanitarian deliveries. Syria’s rebels do not have aircraft.

In New York on Tuesday, Russian and U.S. diplomats insisted that the cease-fire, which went into effect nine days ago, was not dead, despite soaring violence.

The cease-fire was intended in part to allow humanitarian convoys to reach besieged and hard-to-reach areas throughout Syria. Yet following the convoy attack, the U.N. suspended overland aid operations in Syria. Syrians living in opposition areas will be disproportionately affected because the U.N.’s major warehouses are located in government-held areas.

The U.N. estimates that some 6 million Syrians live in besieged and hard-to-reach areas.

Elsewhere in Syria, airstrikes on the opposition-run town of Talbiseh, outside of the central city of Homs, killed two civilians and wounded tens of others, according to the activist-run Talbiseh Media Center.

The town is besieged by government forces. The Observatory said government jets subjected the town to heavy bombardment Wednesday morning.

State TV said a Syrian warplane crashed after carrying out a combat mission against Islamic State militants northwest of the capital, Damascus. The pilot was rescued, according to an unnamed military official quoted on state TV.

The ISIS-affiliated news agency Aamaq said the group downed the plane in the eastern Qalamoun mountains after the aircraft carried out four raids. ISIS shot down a government aircraft on Sunday in the eastern Deir el-Zour province.