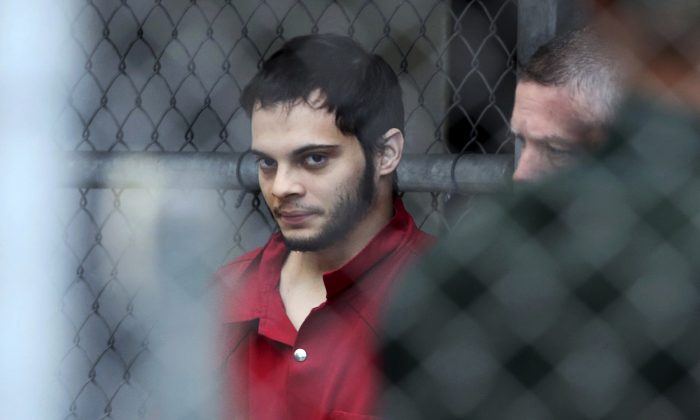 In this file photo, Esteban Santiago is taken from the Broward County main jail as he is transported to the federal courthouse in Fort Lauderdale, Fla., on Jan. 9, 2017. (Amy Beth Bennett/South Florida Sun-Sentinel via AP)
US

FORT LAUDERDALE, Fla.—Just weeks before a gunman opened fire at Fort Lauderdale’s airport, authorities said he walked into an FBI office in Alaska, telling agents the government was controlling his mind and that he was having terroristic thoughts. It’s a daily occurrence for law enforcement agencies and authorities say the difficulty is in assessing whether people are reporting a credible threat, whether or whether they need medical help.

“A lot of resources, time and effort are all put into dealing with mentally challenged people and trying to sort through that type of information to find out what’s valid,” said Pat O’Carroll, former supervisor with the Secret Service and executive director of the Federal Law Enforcement Officers Association.

Relatives of the alleged airport gunman, Esteban Santiago, said his behavior had grown increasingly erratic in the year before the shooting. While in Iraq, his family said, he witnessed a bomb explode near two friends.

Santiago’s brother Bryan said at one point his bother requested psychological help but barely received any, and it’s not clear to what extent he was ever diagnosed or treated, if ever, for mental illness. After the incident at the FBI office, Santiago was held for four days for an evaluation and released.

Law enforcement says each hotline tip and visit is documented, but there is usually no record of whether someone appears to be mentally ill because authorities don’t have the expertise to make that determination and don’t want to stigmatize people.

“There are times of lucidness and you can’t just reject everything the person says. Even if they have a frequent track record of calling up, they are going to be given the same amount of attention … so it is even more time consuming,” O’Carroll said.

In November, agents questioned an agitated and disjointed-sounding Santiago and called police, who took him for a mental health evaluation. Authorities said he clearly indicated at the time that he was not intent on hurting anyone, and that authorities had no legal right to detain him. Weeks later, he perpetrated one of the deadliest airport attacks in U.S. history, killing five people and wounding six, authorities said.

In most states, the standards for involuntary hospitalization are stringent and require that someone be a threat to themselves or someone else. The FBI in Anchorage stressed that Santiago was not dangerous at the time they interviewed him.

“There’s no simple fix to say the FBI should’ve just locked this guy away because he’s hearing voices.”

Experts are quick to point out that mental illness is not an indicator of violence.

“If you have a mental health issue you’re more likely to be a victim of a crime than a perpetrator,” Oakland County Sheriff Michael Bouchard said.

Sometimes those suffering with mental illness fixate on law enforcement and government agencies, creating constant intersections between the two.

The Secret Service conducted a detailed investigation of 43 attacks on federal government officials and facilities between 2001 and 2013. Over half of the offenders experienced one or more mental health symptoms, including include paranoia, delusions and disorganized or odd thinking, according to the 2015 report.

“You can go through and look at a lot of the shootings, whether it’s the Colorado theatre or Navy shipyard or Newton, obviously there were mental health issues involved,” Bouchard said.

Loughner had been exhibiting symptoms of mental illness and engaging in bizarre behavior in the years before, including hearing voices and talking about the government trying to control his mind.

He once visited a sheriff’s office to say his identity had been stolen and that his name and picture were being used online without his permission. It’s unclear if that was true or whether it was part of the growing paranoia that plagued him as his illness worsened.

Yet despite his growing symptoms, his concerned parents couldn’t get him to see a mental health expert, according to a report by the Secret Service.

Involuntary hospitalizations typically don’t last more than three days and often function more as a holding place with little therapeutic benefit. Many patients are released with no follow-up appointments or medications, such as the case with Santiago, according to his brother.

“If the way we responded to heart attacks was to hospitalize people, save their life and discharge them after three or four days with no follow-up care, we’d have a lot of people dying and not recovering and that’s in essence what I think we have with our mental health system,” said Ron Honberg, senior policy advisor for the advocacy group National Alliance on Mental Illness.