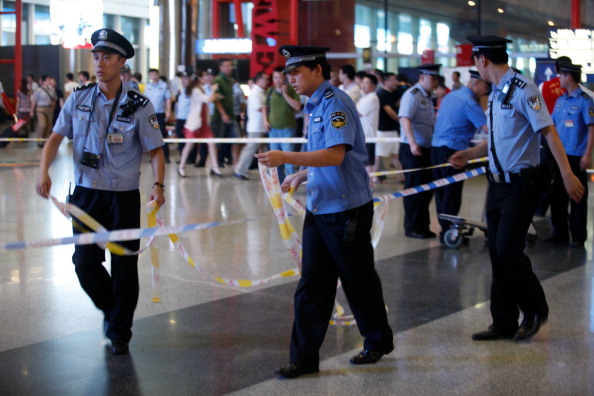 Policemen and security personnel secure Terminal 3 of the Beijing Capital International Airport where an explosion occurred on July 20, 2013 in Beijng, China. Disabled Ji tried to go through the court system to get justice, but no one would help him, so he set off a bomb. (ChinaFotoPress via Getty Images)
China

Airport Bomber Had Nothing to Live For, Journalist Reflects

A paralyzed man who set off a bomb in a Beijing airport has caused comments about the injustice and despair some criminals have experienced that drive them to commit such acts.

Before Ji Zhongxing set off the bomb on July 20, he yelled at the other people in the airport to stay away, Caixin Online reporter Luo Jieqi wrote in an editorial. As a result, only Ji was injured.

He was taken to Beijing Jishuitan Hospital, where Luo saw him. His left hand was blown up and had to be amputated at the wrist.

In Luo’s line of work, she writes, it’s common to meet or hear stories of people who have “nothing left to live for.” She writes that she feels sympathy for Ji and his plight.

“When I read his story, I was grabbed by a strange feeling,” she adds.

Luo noticed she and Ji were the same age, and they were both in China’s Guangdong Province in 2005 when Ji became disabled. He was working illegally, giving people rides on his motorcycle, when security guards beat him severely and left him paralyzed.

“He could no longer marry or have children. For him, tragedy was a way of life; for me, tragedy was what I wrote about for work,” Luo writes.

Ji tried to go through the court system to get justice, but no one would help him. He had to return to his hometown in Shandong Province and live under the care of his elderly father.

Luo quotes a lawyer who wondered why nobody wanted to report on Ji’s injury when he was beaten in 2005, but when he detonated a bomb it attracted the media’s attention.

“My conscience has been asking me the same question,” Luo writes. “If Ji had found me at the time, would I have told his story? The story’s chances of being chosen in a news pitch meeting would have been very small because it would not have been influential enough. It’s too common today.”

Luo has encountered many similar stories of injustice in her work. She describes an encounter with a man who was paralyzed in a mining accident and couldn’t get compensation from anyone, so he was forced to let his wife marry someone else so they could survive.

She also mentions a mother whose daughter was raped while at school, but when she tried to sue the school, she lost. Instead her three children were no longer allowed to attend local schools.

Luo writes that she feels guilty about these people and thinks she should do something to help them, but she doesn’t know what. There’s no way she can pursue justice for everyone.

Upon reading Ji’s story, Luo writes, “My first reaction was that he did not mean to hurt anyone; he meant to take revenge.”

“These people were not innately criminal,” criminal psychologist Wu Boxin told Luo in an interview.

“Most of them were originally workers or peasants. Our political system was founded on the power of the workers and peasants. How can we abandon them now?”