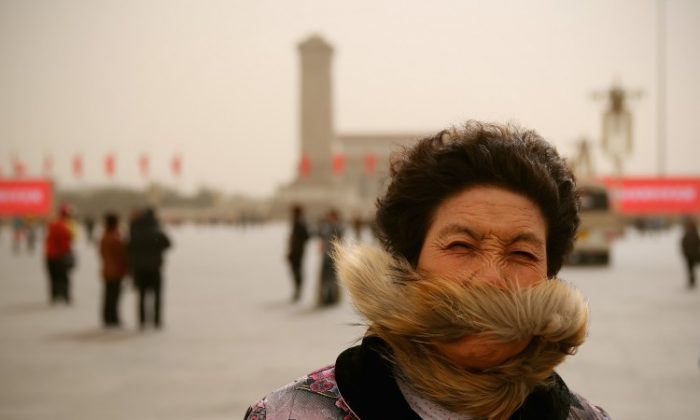 A Chinese tourist walks on the Tiananmen Square during the sandstorm on March 9, 2013 in Beijing, China. (Photo by Feng Li/Getty Images)
China

Air pollution has been linked to around 1.2 million premature Chinese deaths in 2010–around 40 percent of the total–according to new data.

The summary of the data was published in the U.K.’s Lancet journal and is based on the Global Burden of Disease Study’s 2010 figures, as reported by The New York Times. Overall in 2010, air pollution contributed to the deaths of 3.2 million people around the world, it found.

Earlier this year, stark images of people wearing masks amid dark, hazy skies in many Chinese cities caused a stir among bloggers across the country. Many blamed the Chinese regime’s lackadaisical regulatory efforts in curbing air pollution and the regime’s inability to give accurate measurements of air pollution.

In the summary, air pollution in China cut around 25 million healthy years of life from the population, according to the Times.

Scientists found that “ambient particulate matter pollution” was the fourth-leading contributor to death in China in 2010. This was behind smoking, high blood pressure, and dietary problems.

“We have been rolling out the India- and China-specific numbers, as they speak more directly to national leaders than regional numbers,” said Robert O’Keefe, the vice president of the Health Effects Institute, according to the paper. The institute, which is partially backed by the U.S. government, is promoting the study.

Citing diplomats, executives, and businesses, The Financial Times reported that air pollution is forcing many expatriates out of Beijing and other Chinese cities.

“We’re anticipating this summer will be a very big season [of moves out of Beijing] for us,” Chad Forrest, the northern China general manager for Santa Fe Relocations, told the paper.

The pollution, it reported, is also making it more difficult for companies to hire international workers.

“It seems a lot of people, particularly families with small children who have been here a few years, are reconsidering the cost-benefit equation and deciding to leave for health reasons,” Forrest said.

This comes just after a new report from the Chinese Academy of Science, Capital University of Economics and Business, and Beijing Commission of Development and Reform said that Beijing and the nearby city of Tianjin are chronically overpopulated, and both have infrastructure that cannot support them.

They warned that Beijing is in a state of emergency due to its scarce water resources, high pollution levels, and public transportation woes. Tianjin, it added, was at a “warning level.”