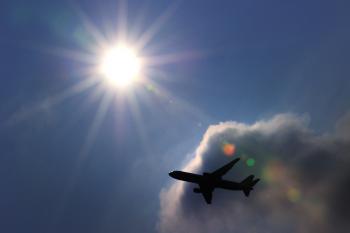 A passenger plane is seen shortly after takeoff at the Geneva international airport on March 11, 2010. The International Air Transport Association (IATA) said that global airlines are in line to earn a record-setting $15.1 billion in 2010. (Fabrice Coffrini/Getty Images)
Business & Economy

Global airlines are in line to earn a record-setting $15.1 billion in 2010, according to the industry group International Air Transport Association (IATA).

IATA, which represents most international airlines in the world, said this week that it had revised upward its 2010 forecast for airline profits to $15.1 billion, on greater consumer spending patterns.

“Our profit projections increased for both 2010 and 2011 based on an exceptionally strong third-quarter performance,” said Giovanni Bisignani, IATA’s director general, in a statement. “But despite higher profit projections, we still see the recovery pausing next year after a strong post-recession rebound. And the two-speed nature of the recovery is unchanged with European airlines continuing to underperform other regions.”

The newly revised forecast was substantially higher than the previous estimate of $8.9 billion in profits. IATA expects profits next year to subside to $9.1 billion.

Analysts say that airlines have profited immensely from a slew of new fees they charge related to snacks/food, luggage check, and upgrades.

However, IATA said that profit margins are still weak.

“Margins remain pathetic,” Bisignani said. “With a 2.7 percent net margin in 2010 shrinking to 1.5 percent in 2011, we are nowhere near covering our cost of capital.”

In addition, the global recession has taken a toll on the size of traditional carriers. According to IATA, the largest international airlines—by market capitalization—now reside in Asia. Air China, by that measure, is the largest, followed by Singapore Airlines, and Hong Kong’s Cathay Pacific.