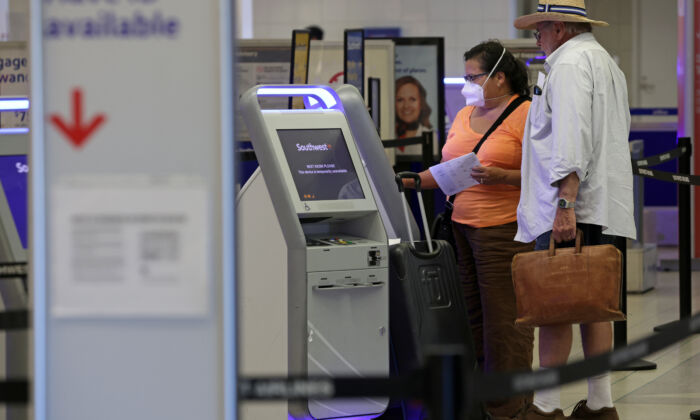 Travelers check themselves in at a kiosk at Philadelphia International Airport on September 2, 2022 in Philadelphia, Pennsylvania. (Alex Wong/Getty Images)
US News

Airlines have delayed or canceled hundreds of flights during the U.S. Labour Day holiday weekend.

There were 743 delays within, into, or out of the United States, and 70 cancellations as of 11 a.m. ET Sunday, according to the flight tracking website FlightAware.

More than 3,700 U.S. flights were delayed on Saturday, and another 145 were canceled.

These delays and cancelations come at a time when millions of Americans are traveling via plane, road, and rail during the weekend of Labour day, which takes place on the first Monday of September.

Nearly a third of Americans plan to travel for the holiday weekend, according to a survey from the American Automobile Association (AAA) published earlier this week.

Roughly 12.7 million are scheduled to travel via plane from Sept. 1 to Sept. 5, despite higher-than-average flight prices, according to travel app Hopper. The estimated figures represented an increase of almost 22 percent compared with 2019 passenger levels shown in the U.S. Transportation Security Administration checkpoint number, according to Reuters.

As the number of people traveling is expected to rebound to the level before the pandemic, airlines struggle to keep pace, with mass cancellations being blamed on pandemic-related staffing shortages.

Ahead of the holiday weekend, the Department of Transportation launched a new interactive dashboard where passengers could compare major airlines’ guarantees, refunds, or compensation in case of flight delays or cancellations.

“Passengers deserve transparency and clarity on what to expect from an airline when there is a cancelation or disruption,” Transportation Secretary Pete Buttigieg said in a Sept. 1 statement. “This dashboard collects that information in one place so travelers can easily understand their rights, compare airline practices, and make informed decisions.”

Cancelled or Delayed Flight? How to Be Compensated by the Airlines

Many of the major U.S. airlines—such as American Airlines, Delta Air Lines, and JetBlue—have announced plans to provide meals, hotel accommodation, or other services for passengers if a cancellation or delay results in them waiting for three hours or more.

The Department of Transportation is hoping that the dashboard will encourage competition among airlines to offer the most transparency and the best protections for customers.

Jack Phillips And The Associated Press contributed to the report.