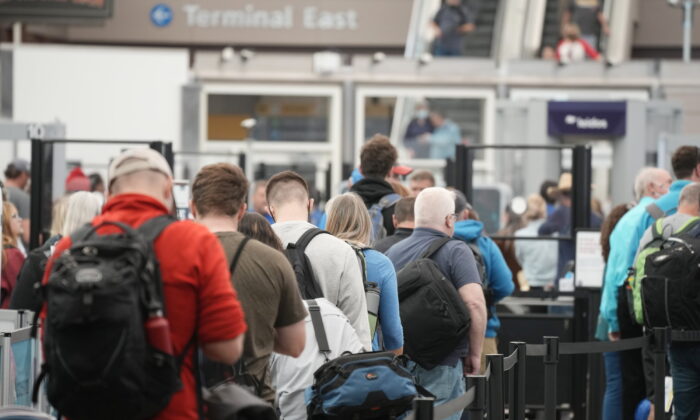 Travelers queue up at the north security checkpoint in the main terminal of Denver International Airport in Denver on May 26, 2022. (David Zalubowski/AP Photo)
Congress

Airlines Cancel, Delay Hundreds of Flights Ahead of Fourth of July Weekend

Airlines have already canceled and delayed well over 1,000 flights as of Friday ahead of the Fourth of July holiday weekend.

More than 3,200 U.S. flights have been delayed and another 349 have been canceled as of Friday at 3 p.m. ET, according to tracking website FlightAware’s latest update.

The cancelations come at a time when tens of millions of Americans are expected to travel over the weekend via plane, road, and rail. Auto club AAA predicted that about 48 million people will travel between Friday and Monday, July 4. Some 3.55 million are expected to fly.

He added that TSA officials believe Friday and Sunday “will be very busy” at airports.

Earlier this week, Transportation Secretary Pete Buttigieg warned that Americans could face problems while traveling over the July 4 weekend due to weather problems and labor shortages. He noted that more than 20,000 flights have been canceled since Memorial Day in May.

“The majority of cancellations and the majority of delays have nothing to do with air traffic control staffing but when there is an issue, we’re working that issue,” Buttigieg said.

Several weeks ago, major airlines warned that an increasing number of flights will be canceled this summer even though airlines received  $54 billion in federal assistance during the COVID-19 pandemic to deal with the layoffs of employees, including pilots.

A group of airline pilots issued a statement in May that mandatory COVID-19 vaccinations may have forced pilots out of work.

“Many of our pilots have lost medical certification to fly and may not recover the same,” the statement reads. “Others are continuing to pilot aircraft while carrying symptoms that should be declared and investigated, creating a human factors hazard of unprecedented breadth. The very foundation of our just safety culture—non-punitive reporting—no longer exists.”

Some lawmakers have proposed issuing fines to airlines for cancelations amid the surge.

“The American people are sick of airlines ripping them off, canceling flights at the last minute and delaying flights for hours on end,” wrote Sen. Bernie Sanders (D-Vt.). “It’s time for [Buttigieg] to fine airlines $55,000 per passenger for every flight cancellation they know can’t be fully staffed.”