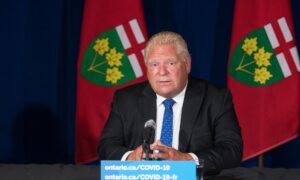 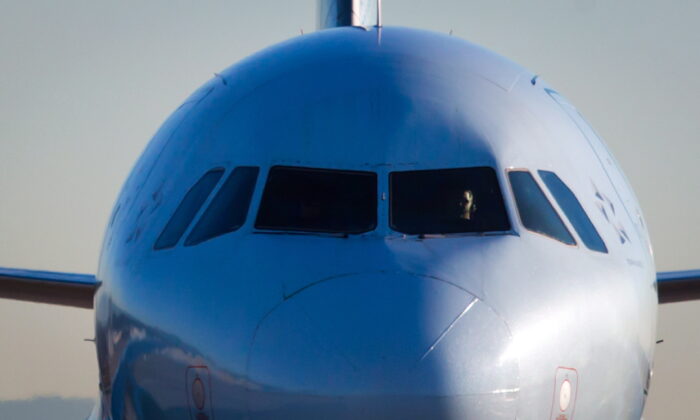 A pilot taxis a plane to a gate after arriving at the Vancouver International Airport in Richmond, B.C., in a file photo. (The Canadian Press/Darryl Dyck)
Canada

An online organization dedicated to stopping vaccination passport requirements for airline staff and passengers is bringing these demographics together in an effort to change public opinion and policy.

According to the declarations of those who have signed up online, Free to Fly represents over 1,500 Canadian airline professionals—pilots, flight attendants, and ground and airport support staff—and an additional 9,100 air passengers.

Applicants must indicate in the online form which airline they work for and what their positions are, and then they are allowed to join.

Commercial pilot Derek Grigor, one of the four founding members of Free to Fly, says the membership has doubled each of the last few weeks.

“We were just getting frustrated … freedoms after freedoms are being taken away. We were like, ‘this is ridiculous, we’ve got to do something, we can’t just sit back anymore,’” Grigor told The Epoch Times.

“Most of us at Free to Fly are not anti-vaxxers, but what we’re questioning is, why are we doing what we’re doing, and forcing it so rapidly, so quickly, so fast? I understand we need to get the economy going, but we’re past that now. And how many more shots and boosters do we need? It just seems to be endless.”

The federal government announced on Aug. 13 that all airline passengers have to be fully vaccinated by Oct. 31, a move that was welcomed by Air Canada, WestJet, and the National Airlines Council of Canada. Air Canada subsequently ordered its employees to get COVID-19 shots by Oct. 30 or face termination.

“When your careers are being threatened—20, 30 years of being with your specific corporation and because you don’t get your vaccine you’re fired? That’s not how Canada was built. So we’ve all joined together, and it’s pretty awe-inspiring actually,” Grigor said.

“I’ve been hearing [comments from airline staff] every day over and over and over: ‘I thought I was going crazy. I’m so glad I’m not the only one out here, that actually people believe the same way I do.’”

Grigor says it is “absolutely outrageous” that employees with a career spanning decades could be fired for refusing to be vaccinated, and wishes the unions representing them would step up to the plate.

“Unions in the airline industry [say], ‘Oh no, we’re good. We still think the best course of action is for you to go get your vaccine.’ And so you’re going, ‘What? You’re supposed to be standing up for all of us. So you’re going to tell me, you’re not going to stand up for me?’ So we’re waiting to see that play out.”

Grigor said Free to Fly has opened the minds of people “living and breathing mainstream media and … just believing everything they’re told.” He said a recent Telegram poll of an informal group of staff of one Canadian airline showed 42 percent were against forced vaccination.

“We’re unwilling to cede our health freedoms, our basic rights. Each of us have our own bodily autonomy. So to promote medical injections—that that’s how we’re going to get out of [COVID], with no long-term proven safety and efficacy—we just think that’s the wrong direction to go.”

The group says on its website that the “installation of a regime of medical segregation threatens the very foundation of our democracy.”

Free to Fly released a 12-point platform to outline its perspective. It emphasizes informed consent according to the Nuremberg Code, saying “the ability to make informed medical decisions is an essential aspect of freedom.” It also says “a robust airline industry is good for society because it serves to unite the world” and that “passengers who travel on Canadian airlines are sufficiently intelligent and responsible to make the right medical choices for themselves.”

The organization has faced some censorship, however. Twitter “temporarily restricted” Free to Fly’s account after just 13 tweets, citing “unusual activity” from its account. Its most recent activity was a Sept. 3 repost that showed vaccination rates by doctors in London, Ont., were less than the general population.

Another founding pilot at Free to Fly spoke to The Epoch Times on the condition of anonymity, explaining that being a federal employee complicates his ability to speak openly.

He said it’s time to push back.

“It’s either going to improve or get worse, and that’s really before the court of public opinion and the courts themselves. They’re interrelated, as much as everybody would like to think they’re not. [We are] advocates more broadly for the rights of every single person in the nation,” he said.

The pilot said a lengthy conversation with his MPP illustrated to him an unwillingness to investigate or consider alternatives. He notes that many pilots are military veterans and finds it ironic that those who have dedicated their lives to defending Canadian freedoms could now lose some of their own freedoms.

“A number of pilots, a good part of our demographic, comes out of the military. Ironically, … the liberties that they fought for are about to be curtailed if they don’t hand over their health freedom,” he said.

“I’ve been pretty pointed with some of my messaging, because this isn’t about a vaccine anymore—it’s about liberties. If you’ve got kids and grandkids, you better start getting vocal because you’ve got a vaxport to a digital currency.”

“So it’s a righteous battle, one that I firmly believe in, and this is indeed the hill to die on.”