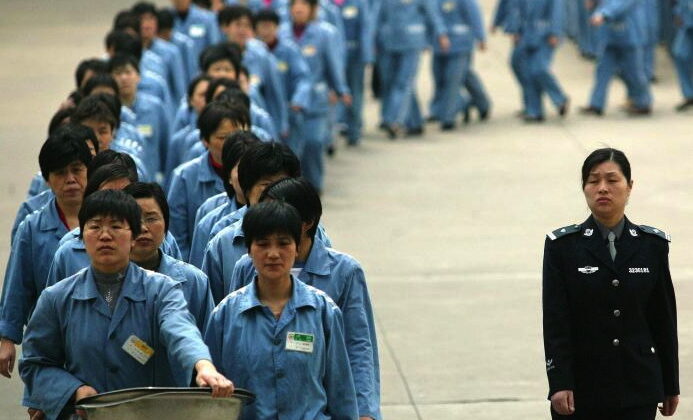 Prisoners walk beside a police escort during a prison open day in Nanjing, 2005. (STR/AFP/Getty Images)
China

Two large Swedish and American manufacturing companies, and an Australian airline, are investigating claims that they bought headphones and other electrical appliances that were made by Chinese inmates in forced labor camps.

Inmates at Dongguan Prison in Guangdong Province said that they made disposable headphones for Qantas, British Airways and Emirates as well as electrical appliances for a local company that supplies Electrolux and Emerson, according to the Review.

Danny Cancian, a New Zealander who served four years in Dongguan for manslaughter after kicking a man who later died from a cerebral hemorrhage, called the prison “a very cruel environment.” If prisoners didn’t meet production quota, they would be “taken outside and tasered,” he told the Review. “You wake up every morning wondering if you are going to survive the day.”

Cancian stated that prisoners had a monthly salary of 8 yuan ($1.30) and had a more than 70 hour work week.

Chinese company Dongguan City Joystar Electronic uses labor camps to fill big orders, a representative told the Review. It had made 300,000 headphone sets for Qantas in the beginning of last year which were delivered to Qantas’s supplier, a Vietnamese company, Airphonics.

Qantas has suspended business with Airphonics while the allegations are being investigated. The use of forced labor and the third-party Dongguan company were both violations of Qantas’s standards, according to a spokeman cited by AFP.