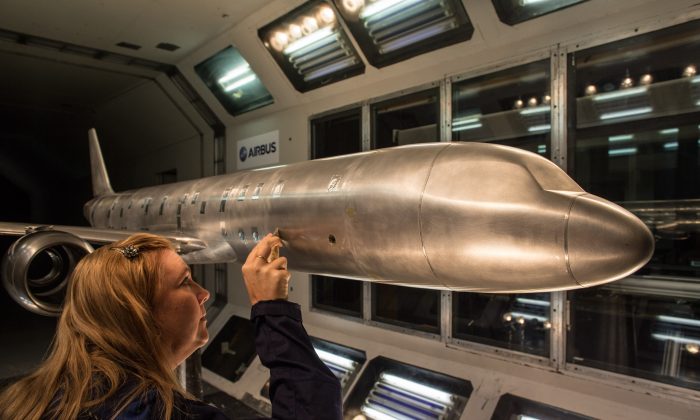 A scale model of a plane is prepared for testing in the Airbus Filton's low speed wind tunnel facility at the Airbus aircraft manufacturer's Filton site in Bristol, England, on Nov. 19, 2015. (Matt Cardy/Getty Images)
Aviation News

The U.S. Patent Office has approved a radical design by French airplane manufacturer Airbus to cut down on the time that airplanes sit at airport terminals.

In what Airbus calls its “Aircraft Pod Concept,” passengers would board before the plane even arrives at the terminal into detachable cabins, which would then be transported into the plane in a fashion similar to how aircraft cargo is loaded.

With detachable cabins, “the aircraft can then be used for other purposes during the transfer [of passengers into the cabin.]” “In particular, it is not necessary for the aircraft to be immobilized on the ground during this transfer,” the patent reads.

Commercial aircraft turn times—the time it takes to unload and prepare for departure—have increased steadily since the 1970s. Making reductions in that area could allow a smaller number of planes to service the same routes as well as increase airline profit margins, which have been steadily decreasing in recent years.

One factor contributing to rising turn times is the slower pace at which passengers board airplanes. According to Boeing, the enplane rate fell by 50 percent from 1970 to the late 1990s. A 2008 report from the company estimates that reducing turn times by 10 minutes could increase the utilization rate of its fleet of airplanes by 8.1 percent.

The Airbus patent was first filed on Feb. 28, 2013, when the airline industry was still recovering from the blow dealt by the Great Recession, and profit margins were much lower than even today. According to the International Air Transport Association, airlines were making an average profit of $4 per passengers in the 12 months precedent June of 2013, but that figure had risen to $8.27 by June of 2015.

Airbus and other manufacturers have filed a number of noteworthy patents aimed at making the airline industry more efficient and economical, but most have entailed modifying cabin interiors to fit more people into the same amount of space. Airbus’s newly approved patent stands out for proposing a radical transformation in how the cabin is used as a whole.

In October, Airbus filed a patent for a “mezzanine seating area” that would take advantage of the empty space of aircraft fuselage, which would introduce a new level of seats on top of passengers sitting in the middle aisle. Other ideas from the company include a patent filed last year that envisaged pivoting bike-seats that forced passengers to be half-standing.

But don’t expect detachable cabins or mezzanine seats to be available on flights any time soon. In response to the backlash to the bike-seat-like design from last year, Airbus told the Telegraph that it files hundreds of patents each year, and just because a patent is filed doesn’t mean that the idea will make it past the design stage.

Movable cabins would have to be approved by the Federal Aviation Agency if Airbus wants to use U.S. airports, and the FAA is known for its meticulous regulations for commercial flights, with standards for everything from the types of medical supplies on board to the number of degrees a seat can tilt before it needs to have a seat-belt.