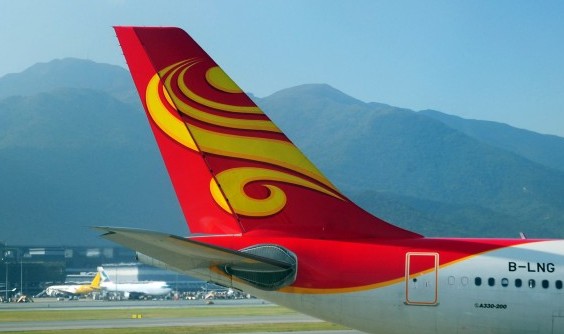 The tail livery of a Hong Kong Airlines Airbus A330 is seen at Hong Kong International Airport on Oct. 31, 2011. The airline announced a new order of 10 A380 super-jumbo jets for a total of $3.8 billion. (RICHARD A. BROOKS/AFP/Getty Images)
Business & Markets

Hong Kong Airlines Ltd. (HKA) has made an agreement with the world’s largest passenger jet manufacturers—Airbus—to order 10 A380 aircrafts, at a total value of $3.8 billion.

The delivery of the first super-jumbo planes will arrive in 2015, according to Kenneth Thong, head of corporate governance and international affairs at the carrier. In an interview with Bloomberg television, Thomas said: “We think the business connection between Asia and Europe is going to be very exciting for the next couple of years, after the current (economic) crisis is over. We are planning for the aftermath.”

The deal occurred later than expected because there was a dispute between China and the European Union due to compliance with the carbon emissions trading scheme, which would require carriers to pay extra. The United States has also voiced criticism of the EU carbon emissions policy.

With the new order, Airbus will have signed contracts for 188 pending deliveries of the world’s biggest commercial aircraft.

There are several concerns for the France-based commercial airline manufacturer—an unstable economic outlook for the EU and recent reports of quality control about cracks discovered on the wing ribs of the A380s, as confirmed by Singapore Airlines and Qantas Airways.

Qantas announced: “Investigations have found that the cracking is unrelated to the engine failure incident experienced by this aircraft in November 2010 and is not unique to Qantas. It has now been repaired.”

In addition, a Singapore Airlines spokesperson claimed, “Cracks were found on a small number of wing rib feet on an Airbus A380 during inspections in the second half of last year. These pose no safety issue and repairs were carried out on the aircraft,” based on an email to Reuters.

He further added, “Repairs were subsequently carried out on a second aircraft. We have kept the relevant regulatory authorities fully informed and will be carrying out inspections and any necessary repairs on other A380s as they go in for routine checks.”