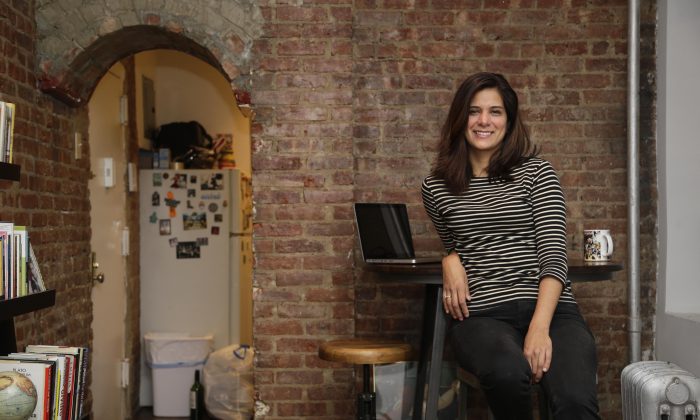 Mishelle Farer, an avid user of Airbnb, in the apartment she rented in New York on Oct. 10, 2013. (AP Photo/Seth Wenig)
New York

If requested by attorney general, online site will turn over customer details
By Catherine Yang

NEW YORK—Judith Mason, a retired chaplain, rents rooms in her East Harlem brownstone to cover her expenses. “I try to break even, I’m about at that level,” Mason said.

She used to advertise the rooms as a bed and breakfast. If she was lucky, a couple of guests stayed every month.

Since listing her home on Airbnb, an online site that allows individuals to list apartments or rooms for temporary rents, Mason has people wanting to stay at her home every single day. “So many people have such a lifelong dream for visiting New York City,” Mason said.

Airbnb said hosts like Mason represent the vast majority of its user base. They are people either trying to make ends meet, or make some extra cash while on vacation—not companies trying to turn apartments into illegal hotels. According to the Airbnb, 87 percent of hosts share their primary homes.

On Wednesday, Airbnb and New York Attorney General Eric Schneiderman’s office reached an agreement where the company will provide anonymous data that excludes identifying information such as name and address, and replaces them with unique codes. Airbnb also agreed to provide the attorney general’s office with customer details, if requested.

Schneiderman told the Wall Street Journal he planned to focus on renters of multiple apartments.

The settlement represents six months of back and forth, with Airbnb resisting the attorney general’s requests. Then a subpoena for the host information was at first judged to be too broad and seen as an invasion of privacy.

Meanwhile, travel intelligence company Skift commissioned a data-scraping firm to get that same information, and found some discrepancies after crunching the numbers. Maybe 87 percent of hosts list their own homes, but do they also list other homes?

Skift found that 30 percent of the total listings came from users with more than one listing. Out of those, 102 hosts had seven or more listings as of January. Also, two-thirds of the city’s listings were for the “entire home/apartment,” though it is illegal to rent a full apartment in New York City for less than 30 days without the host present.

The San Francisco-based company has been facing policy battles in a number of cities now as it’s grown in size. It now has 34,000 listings worldwide, and it is valued at $10 billion by investment firm TPG Growth.

In New York City, Airbnb has been accused of everything from putting a dent in the hotel industry to exacerbating the city’s affordable housing crisis. At the same time, Airbnb executives have approached the new administration to secure legislation that would likely yield an additional $21 million in tax revenues for the city from the individuals who list homes.

Now on the watch list for companies to go public in 2014, Airbnb is clearly trying to comply with regulations. It’s lobbying for legislative changes and offering to pay more taxes, and it recently deleted 2,000 New York listings it deemed illegal.

The company’s actions suggest it believes it’s here to stay.

Airbnb has been pegged against affordable housing in the city, one of the Bill de Blasio administration’s highest priorities.

Real Affordability for All, a coalition representing over 50 tenant groups, points out that the most popular Airbnb neighborhoods are also the ones where the need for affordable housing is highest. At the same time, the company said 62 percent of New York City hosts rely on the service to make their own rents, in effect making New York more affordable.

“It is very difficult for Airbnb to make an economic argument,” said Manhattan Institute researcher Nicole Gelinas. “If enough people [use Airbnb to afford rent] then you’re just pushing up housing prices. It just creates a vicious cycle.”

It’s no secret people see Airbnb as a way to make some extra money (the company was conceived as such), and there are now plenty of guides that teach new hosts how to optimize the returns on their spare rooms or units.

But in a city like New York, which constrains some landlords from making a profit, should the tenant then be allowed to profit from the unit? Gelinas said no. Doing so would be a violation of the tenant’s lease, yet evicting the tenants for violating the lease is not what the city wants either.

Rent-stabilized units, which total close to 1 million, are hard enough to come by that it is less likely these are the ones being rented on Airbnb, Gelinas said. More often than not, it is the market-rate apartments and condominiums that are affected.

“It is a real problem for market-rate housing,” Gelinas said. When a condo is more valuable as a short-term rental unit than as a residence, it drives up the price. If these units become too expensive for the expected market-rate buyer, that buyer may very well end up taking away what could have been an affordable unit for, say, a middle-class family.