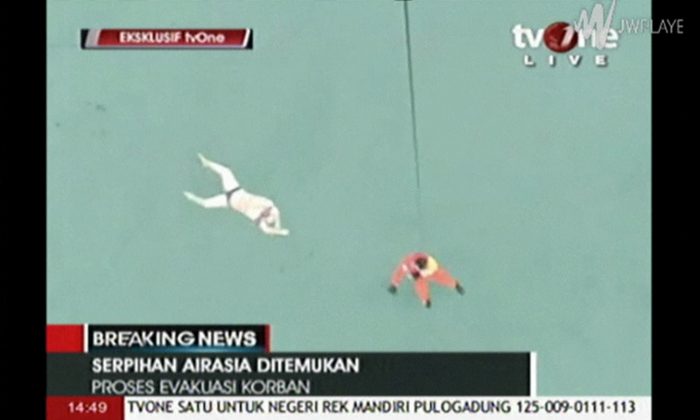 In this image taken from video released by TV One, a rescuer is lowered on rope from a hovering helicopter near a body in Java Sea waters, Indonesia Tuesday, Dec. 30, 2014. Indonesian officials on Tuesday spotted six bodies from the AirAsia flight that disappeared two days earlier, and recovered three of them, in a painful end to the aviation mystery off the coast of Borneo island. (AP Photo/TV One via AP Video) TV OUT
Asia & Pacific

Indonesian officials said that rescuers looking for missing AirAsia Flight QZ-8501 found debris and bodies off the coast of Borneo on Tuesday. Relatives of the 162 people on board broke down in tears after it was shown on live TV, prompting criticism against the broadcaster that  showed the live footage.

AirAsia CEO Tony Fernandes said, “My heart is filled with sadness for all the families involved in QZ 8501. On behalf of AirAsia my condolences to all. Words cannot express how sorry I am.”

#QZ8501 victim (blurred) found with only underwear on. This suggests free fall. pic.twitter.com/Qb1hszq4YD

The firm, in a statement, said Indonesia’s search and rescue agency “confirmed that the debris found earlier today is indeed from QZ-8501.”

The aircraft’s debris was located in the Karimata Strait more than 100 nautical miles southwest of Pangkalan Bun in Borneo. Six bodies were also found about 100 miles from from Central Kalimantan province, said First Adm. Sigit Setiayanta, commander of the Naval Aviation Center at Surabaya Air Force base.

It’s presumed that every person on board the aircraft died.

“At the present time, search and rescue operations are still in progress and further investigation of the debris found at the location is still underway. AirAsia Indonesia employees have been sent to the site,” the company added.

TV One, an Indonesian news channel, was panned on social media websites after it showed footage of the bodies and at the same time, showed the live reaction of families of the passengers. At least two family members were carted out of the room in Surabaya, Indonesia, where they were waiting for news on their loved ones.

There have been questions about how the plane disappeared and crashed. One seems to center on the pilot’s decision to not make a distress call.

As pilot and author Patrick Smith notes, “effectively it means nothing.”

“Communicating with air traffic control is pretty far down the task hierarchy when dealing with an emergency. The pilots’ priority is to control the airplane and deal with whatever malfunction or urgency is at hand. Talking to [air traffic control] comes later, if it’s practical,” he wrote.

The vast majority of the passengers were Indonesian, who were likely going to Singapore for the holidays. Haidar Fauzie, 60, said his daughter Khairunnisa Haidar was a flight attendant on the plane.

“From the start, we already knew the risks associated with being a stewardess,” Fauzie said. “She is beautiful and smart. It has always been her dream to fly. We couldn’t have stopped her.”