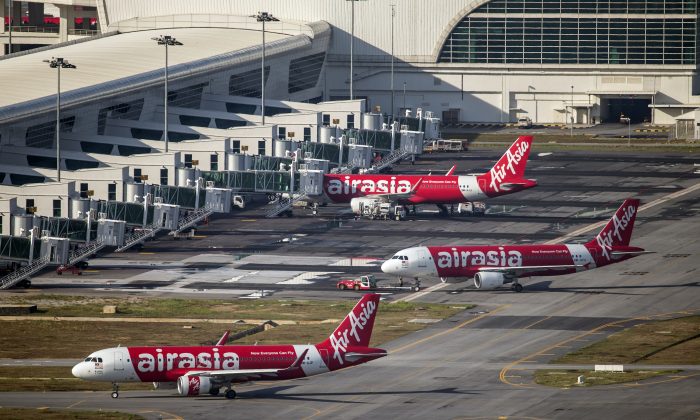 In this Nov 26, 2014 photo, AirAsia Airbus A320-200 passenger jets are parked on the tarmac at low cost terminal KLIA2 in Sepang, Malaysia. An AirAsia plane with 161 people on board lost contact with ground control on Sunday, Dec. 28, 2014, while flying over the Java Sea after taking off from a provincial city in Indonesia for Singapore, and search and rescue operations were underway. The planes in this photo are not the plane that went missing while flying from Indonesia to Singapore but one of the same models. (AP Photo/Vincent Thian)
AirAsia Disaster

Captain Iriyanto, an Indonesian, and First Officer Remi Emmanuel Plesel were identified as the crew for AirAsia Flight QZ-8501.

They were identified by an Indonesian transportation official in local media reports. Their ages were not revealed.

AirAsia said that Iriyanto, who only has one name, had more than 6,000 hours of flight experience. Plesel had 2,275 flying hours.

AirAsia issued a statement on Facebook about the missing plane:

AirAsia Indonesia regrets to confirm that flight QZ8501 from Surabaya to Singapore has lost contact with air traffic control at 07:24 (Surabaya LT) this morning. The flight took off from Juanda International Airport in Surabaya at 0535hours.

The aircraft was an Airbus A320-200 with the registration number PK-AXC. There were two pilots, four flight attendants and one engineer on board.

Nationalities of passengers and crew onboard are as below:

At this time, search and rescue operations are being conducted under the guidance of The Indonesia of Civil Aviation Authority (CAA). AirAsia Indonesia is cooperating fully and assisting the investigation in every possible way.

The aircraft was on the submitted flight plan route and was requesting deviation due to enroute weather before communication with the aircraft was lost while it was still under the control of the Indonesian Air Traffic Control (ATC).

The aircraft had undergone its last scheduled maintenance on 16 November 2014.

AirAsia has established an Emergency Call Centre that is available for family or friends of those who may have been on board the aircraft. The number is: +622129850801.

AirAsia will release further information as soon as it becomes available. Updated information will also be posted on the AirAsia website, www.airasia.com.

AirAsia, which has a presence in most of Southeast Asia and recently India, has never lost a plane before and has a good safety track record.

“We don’t dare to presume what has happened except that it has lost contact.” Djoko Murjatmodjo, Indonesia’s acting director general of transportation, told reporters. He said the last communication between the pilot and air traffic control was at 6.13 a.m. (2313 GMT Saturday) when the pilot “asked to avoid clouds by turning left and going higher to 34,000 feet.”

He said there was no distress signal from the cockpit.

The contact was lost about 42 minutes after the single-aisle, twin-engine jetliner took off from Surabaya airport, Hadi Mustofa, an official of the transportation ministry told Indonesia’s MetroTV. It was about an hour before it was scheduled to land in Singapore at 0030gmt.

The plane had two pilots, five cabin crew and 155 passengers, including 16 children and one infant, AirAsiaIndonesia said in a statement. Indonesian officials had earlier said there were 161 people on board.

The AirAsia statement said there were six foreigners on board— three South Koreans and one each from Singapore, Malaysia and France. The rest were Indonesians.