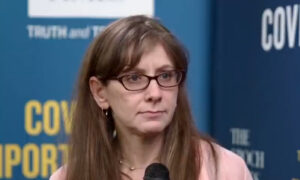 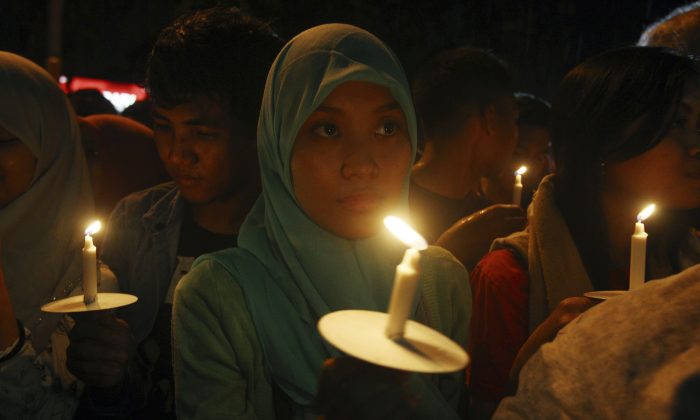 A flight attendant who was on AirAsia Flight QZ-8501, which crashed on Sunday morning, was the first to be buried. Hayati Lutfiah Hamid, who was identified via fingerprints and other means, was laid to rest on Thursday, according to local reports. The funeral took place in Surabaya, located in east Java. Indonesians hold candles to pray for the victims of AirAsia Flight 8501 in Surabaya, Indonesia, Wednesday, Dec. 31, 2014. Bad weather hindered efforts to recover victims of the jetliner on Wednesday, and sent wreckage drifting far from the crash site, as grieving relatives prayed for strength to endure their losses. (AP Photo/Firdia Lisnawati)
Asia & Pacific

A flight attendant who was on AirAsia Flight QZ-8501, which crashed on Sunday morning, was the first to be buried.

Hamid, 49, was buried in a ceremony attended by family and friends.

The plane went down shortly after takeoff from Surabaya as it was heading to Singapore. It had 162 people on board.

No survivors have been found. The cause of the crash is not known.

On Thursday, AirAsia CEO Tony Fernandes tweeted that the search for the plane might be located soon. “I am hoping that the latest information is correct and aircraft has been found. Please all hope together. This is so important,” he wrote.

He added, “If our beautiful and wonderful crew is identified we will go from Surabaya to palembang with her parents. Heartbreaking soul destroying.”

The company issued a statement, giving an update on the progress of the search. Seven bodies have been found in all, it said.

Sunu said, “On behalf of everyone at AirAsia, we extend our profound condolences to the family and friends of late Hayati Luthfi
Hamid. AirAsia will support everything that the family may need during these difficult times.”

Earlier today, BASARNAS also confirmed that a total of six out of seven remains of QZ 8501 passengers which were recovered in Karimata
Strait had been transported in Bhayangkara Hospital this morning for immediate identification by Disaster Victim Identificiation Police
Department of Republic of Indonesia (DVI POLRI).

Meanwhile, the search and rescue effort still continues. Indonesian Minister of Transportation has deployed 5 additional vessels to the searching area. To date, there are more than 90 vessels and aircraft from numerous countries such as Singapore, Malaysia, South Korea, United States, involved in the operation.