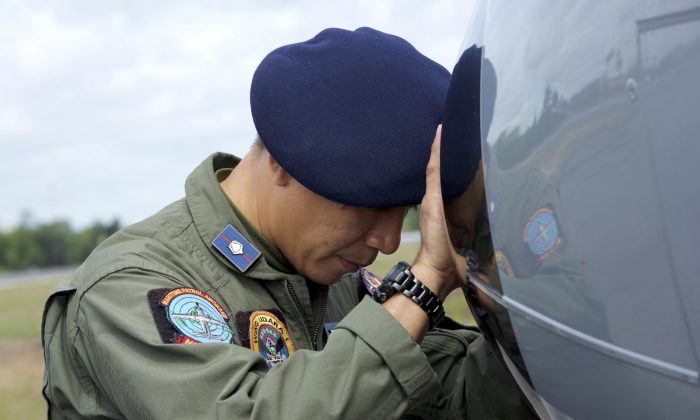 SYDNEY—It is not yet clear what caused AirAsia QZ8501 to crash into the Java Sea on Dec 28, but leaked data suggests “unique” weather conditions as the likely cause. Aviation experts say that should this be the case, airlines must improve training and systems to better respond to extreme weather events.

Martin Babakhan, a specialist in aviation meteorological training at Newcastle University, says weather data from the time of the crash showed a surge of extremely cold air from the north meeting strong warm streams from the south. According to his research this transition happens in this region only every eight or ten years and is responsible for the extreme floods evident in Malaysia and the Philippines in recent weeks.

The transition of warm and cold air created not just one thunderstorm, but a barrier of thunderstorms with energy equivalent to that of two nuclear bombs, says Mr Babakhan.

“The size and intensity of the storm in that area – it is impossible to fly through it,” he said in a phone interview.

Mr Babakhan, has worked for Sydney airport and Williamtown and Richmond air bases, and has developed and conducted specific training courses in meteorology for Qantas pilots. He believes a lack of training on the complexity of thunderstorms, both at the air traffic control level and the pilot level, is a cause for concern.

The lack of sufficient training in meteorology, particularly tropical weather conditions, has left pilots unprepared to deal with extreme events. “The biggest problem is this subject has never been taught in aviation,” he says of many aviation courses.

There were 155 passengers and seven crew, including 41 Christians from the same church, on board AirAsia QZ 8501 when it crashed off the coast of Borneo that early Sunday morning just before Christmas. The AirAsia flight, an Airbus A320, was captained by an experienced former air force pilot, Captain Iriyanto, and was on its way from Surabaya to Singapore.

It is known that the plane was flying at around 32,000 feet and traveling at a speed of around 479 knots when, not long after take off, the pilot requested permission to move up to 38,000 feet, a common approach to avoid turbulence.

According to aviation expert Geoff Thomas, air traffic control was not able to give permission straight away as there were other aircraft in the area and they had to check with Singapore first. When Indonesian air traffic control replied, saying they could only give clearance for 34,000 feet, there was no response. Within minutes, QZ8501 had disappeared from the radar.

Debris found floating in an area some 10 kilometres from the last radar contact, around 90 nautical miles from Borneo Island, has been confirmed as that from the plane. To date 39 bodies have been recovered, but bad weather and strong currents continue to hamper efforts to locate the black box. Indonesia’s search and rescue team located the tail of the plane on Jan 7, but has yet to confirm that other large objects located on the sea floor are indeed that of the AirAsia plane.

While speculation about the cause of the crash remains, leaked information from the air crash investigation team shows an abnormal flight pattern.

Mr Thomas, who runs aviation safety website airlineratings.com, says when air traffic control returned to give the plane clearance, QZ8501 was already at 36,600 feet and climbing. It appeared to be travelling upwards at a rate of between 9000–12,000 feet per minute, a rate virtually impossible for a plane that size. At the same time, the plane’s air speed had declined by around 217 knots.

Within minutes, the plane was hurtling toward the ground at speeds of between 11,000 feet and 24,000 feet per minute.

Mr Thomas says the source of the leaked information is “very very good” and the data is accurate.

A normal descent from 32,000 feet for a commercial airline would take around 30 minutes but QZ8501 appears to have dropped within four or five minutes from last contact.

“Obviously this was something far worse,” he told Epoch Times. “Planes can’t fly through thunderstorms – they are not designed to do that, and they don’t do that.”

Some media reported that bodies were found wearing life jackets, but these reports have since been discounted. There would have been mayday calls if that was the case, says Mr Thomas. The more likely scenario is one of Captain Iriyanto fighting to the last to get out of a thunderstorm cell that had a devastating updraft and a catastrophic downdraft, before crashing into the ocean.

Indonesian weather agency (BMKG) and the CEO of AirAsia said bad weather was the biggest factor in the accident.

“From our data it looks like the last location of the plane had very bad weather and it was the biggest factor behind the crash,” said Edvin Aldrian, head of research at BMKG.

Indonesian authorities say AirAsia took off without receiving a weather briefing. They also accuse AirAsia of flying without permission, saying the Malaysia-based airline was licensed to fly four days but not on Sunday. The Indonesian Ministry of Transport has ordered a full investigation and has banned AirAsia flights between Surabaya and Singapore.

Mr Babakhan believes the accident is the result of a “bureaucratic breakdown”. The AirAsia flight should never have taken off given the extreme weather conditions above.

“It is the responsibility of the pilot and air traffic controller to understand the complexity of the environment,” he said.

But Mr Thomas says there were at least 7 or 8 planes flying in the area at the time and none have reported particular difficulties. Unless conditions are cyclonic he believes it is up to individual pilots to brief themselves on weather and noted that weather conditions can change dramatically in a matter of minutes.

Thousands of planes fly every day, he said, and airlines rely on pilots to make minute to minute decisions. He noted that new technology developed by Qantas in conjunction with US company Rockwell Collins, had made a considerable difference in avoiding weather related events.

The MultiScan ThreatTrack weather radar is specifically designed to determine the intensity of thunderstorms, ice, hail and even clear air turbulence ahead.

Air turbulence incidents have reduced by around 70 per cent since the multi-scanner was first installed on a Qantas 747 in 2002, he said. Those types of radar are now mandatory for new aircraft and will be in new planes ordered by AirAsia. They were not however on QZ8501.

He said he has had contact with pilots who believe the AirAsia crash could have been avoided if multi-scanners had been used.

“If weather turns out to be a factor it would have taken the guesswork out of it and it would have absolutely shown the intensity of this cell,” he said.

While multi-scanners do make a difference, Mr Thomas does not deny Mr Babakhan’s claim that training is critical.

He says a “volatile discussion” exists in the flying fraternity about training. Radars are not perfect, he concedes, and increased automation has seen a decline in flying skills.

Training must be updated, he says. Much of it is still focused on taking off and landing, a big threat in the ’60s that is largely negligible today. With climate change creating conditions for all sorts of extreme weather events, pilots need particularly to be trained in what he calls “black swan” or “freak events”.

“The training regime is changing and needs to change to look at present threats,” he said.

Meanwhile the search continues for the main body of QZ8501 and the many passengers believed to be still bound to their seats in the plane.