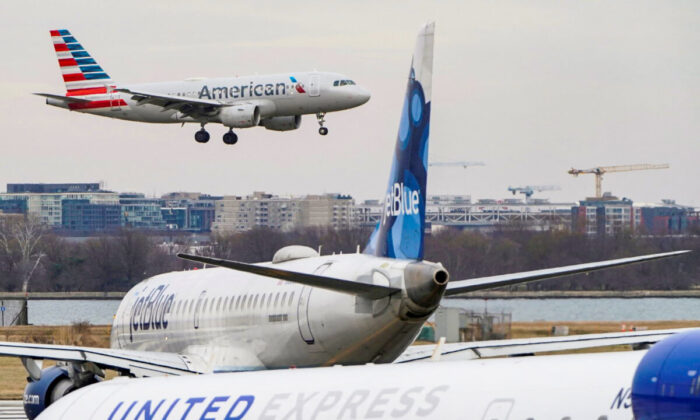 An American Airlines aircraft flies past JetBlue and United Express aircraft as it lands at Reagan National Airport in Arlington, Va., on Jan. 24, 2022. (Joshua Roberts/Reuters)
Companies

With disruptions marking a rocky return to U.S. domestic air travel in recent months, official figures show that complaints against airline service remain 200 percent above pre-pandemic levels despite a 15 percent monthly decline in May.

The Biden administration is keeping a watch on airlines to deter unrealistic flight scheduling and ensure airlines comply with consumer protection requirements.

In June, Delta Air Lines pilots came forward to express their shared frustration with passengers over recent flight delays and disruptions, which they said were “unacceptable.” The pilots said they’d been working on their days off and flying a record amount of overtime.

The number of commercial flights increased between April and May in the United States to over 600,000, of which more than 11,000 were cancelled.

The around 590,000 flights that did operate in May was 86.9 percent of pre-pandemic levels in May 2019. This was a 14.1 percent increase on flights operated in May last year and a 4.24 percent increase in the number of flights in April.

“The ATCR is designed to assist consumers with information on the quality of services provided by airlines,” the department stated in a release.

“DOT remains committed to ensuring airline passengers are treated fairly and is concerned about recent flight cancellations and flight disruptions.”

The department says this includes ensuring prompt refunds when flights are disrupted.

On-time arrivals improved in May, up from 76 percent in April to 77.2 percent. This is down from 77.9 percent pre-pandemic. Hawaiian Airlines, Delta Air Lines, and Alaska Airlines were the top three performers for on-time arrivals.

In terms of cancellations, 2 percent of marketing carriers canceled scheduled domestic flights, which is 0.5 percent up from May last year but is equal to levels in 2019.

DOT received 4,344 complaints about airline service from consumers in May, which was down 14.5 percent from April but up 237 percent from May 2019.

A third of all complaints related to refunds, while 23.8 percent, the second-highest category of complaints, related to disruptions and cancellations.

“The Department’s Office of Aviation Consumer Protection continues to communicate with airlines and travel companies that receive refund complaints to ensure compliance with the refund requirements,” DOT stated.

“Many passengers who had initially been denied refunds have received the required refunds. The Department has taken and will take enforcement action against noncompliant airlines and ticket agents as necessary.”

DOT is keeping an eye on consumer complaints that it receives and contacts airlines to remind them of their obligation to promptly refund passengers.

In May, there were fewer tarmac delays and less mishandled baggage, wheelchairs, and scooters than pre-pandemic. Involuntary denied boarding, or bumping, which is reported quarterly, increased slightly in the first quarter of 2022.

There were no incidents involving the death, injury, or loss of an animal; while disability-related complaints increased from pre-pandemic but decreased since April.

The department reported that alleged discrimination based on race, ethnicity, or religion increased by eight complaints in April and the nine recorded in May 2019. Most of those complaints came from a single incident involved Lufthansa flight 1334 from Frankfurt to Budapest.