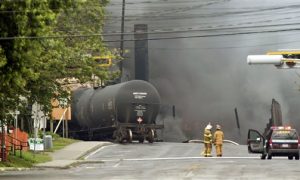 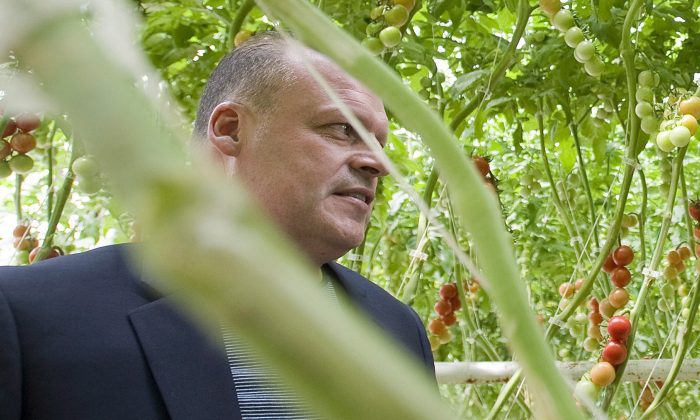 Biologico organic tomato greenhouse owner Stephane Roy is seen in Saint-Sophie, Que., on August 16, 2012. Roy and his teenage son have been missing for two weeks after failing to return from a fishing trip in northern Quebec. (Graham Hughes/The Canadian Press)
Canada

The Quebec Provincial Police have announced that they will suspend aerial searches for Stephane Roy, the founder and president of tomato production business Savoura, and his 14-year-old son Justin, who have been missing for 14 days.

The Sûreté du Québec completed their helicopter search over an area spanning 20,000 square kilometres of woods in the Northern Laurentians on July 22. Spokesperson Claude Doiron told the Montreal Gazette that the searches had been suspended following their completion due to the limited amount of information the police had about the case.

“At the moment we have no evidence on the ground to direct our search,” Doiron said. “We’re asking people who are in the woods, who are hiking on foot, to keep an eye open and contact us should they obtain any information that could further our investigation.”

Doiron added that the search for the pair is still ongoing, and that police wouldn’t rule out returning to the air if investigators managed to narrow down the range for the search area.

The SQ’s decision follows one made by the Royal Canadian Air Force two days earlier, which also chose to halt their aerial searches after little progress. A Twitter statement given by the air force said that they will “relinquish the case to the provincial police force as a missing persons investigation”.

After searching over 20,000 km2 since 11 July for a missing R44 helicopter with two persons on board, the @RCAF_ARC has taken the difficult decision to reduce the search and relinquish the case to the @sureteduquebec as a missing persons investigation.

Roy and his son have not been seen since July 10, when they failed to return from a fishing trip in the businessman’s personal helicopter, described as a white R-44 model.

Despite the extensive and lengthy searches that have been carried out, no clues have been found that might point to the location of the two. Roy’s helicopter trip reportedly lacked a flight plan, and police have not detected any distress signals in the area, so it has been difficult for investigators to track down the exact route they took to reach their destination.

In the two weeks since Roy and his son have been reported missing, the search has employed more than 90 people working with the SQ, the Royal Canadian Air Force, the Canadian Coast Guard, the Canadian Armed Forces, and the Civil Air Search and Rescue Association, among various other rescue services as well as volunteers with private helicopters.

The searchers combed an enormous and densely wooded area between Lac-de-la-Bidière in northern Quebec, where Roy’s reported destination was, and Ste-Sophie, where his tomato production company is based.

Roy’s brother Daniel Roy has been urging the Sûreté du Québec to ramp up their ground search after the force’s decision to end aerial search efforts. He says  visibility on the ground is far better than from the air—possibly due to the thick woods in the location that rescue teams have outlined as the primary search area.

“We’re not giving up. There’s a 14-year-old in this case. There’s no question of leaving him on his own,” he said in an interview with CTV News. “We won’t give up on them, we won’t abandon them, and we won’t abandon Justin.

“For us, we’re [on] day 12 and we’re just as strong as day one, the only difference is we’re better organized.”

Daniel Roy has described his brother as a “no-nonsense pilot,” and said that he managed to safely land a helicopter a few years ago despite losing engine power in midair. “We know his abilities, we know his character—he’s a fighter, he’s a battler, he’s a survivor,” he said.

The SQ has said on Twitter that based on work done by their investigators, they will begin conducting a ground search in a targeted area north of Mont Tremblant Park on July 24.