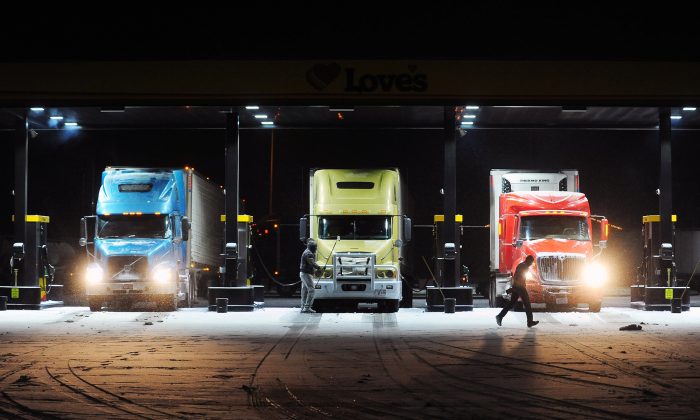 Semi truck drivers fill up with gas as at a Love's Travel Stop in Napavine, Wash. on Thursday, Feb. 6, 2014. Much of Southwest Washington was blanketed in several inches of snow of Thursday causing dozens wrecks along Interstate 5. Bad weather and heavy traffic forced a number of the drivers to break for the night at the Napavine truck stop. (AP Photo/The Chronicle, Pete aster)
Environment

Air Pollution Down Thanks to California’s Regulation of Diesel Trucks

Ever wonder what’s in the black cloud that emits from some semi trucks that you pass on the freeway? Lawrence Berkeley National Laboratory (Berkeley Lab) scientist Thomas Kirchstetter knows very precisely what’s in there, having conducted detailed measurements of thousands of heavy-duty trucks over months at a time at two San Francisco Bay Area locations.

With a specially outfitted research van equipped with sophisticated monitors for several pollutant types, he and his team are studying emissions levels from diesel trucks to understand and analyze the impact of new control technologies and California air pollution regulations.

“We’re measuring a range of pollutants relevant to public health and the environment,” said Kirchstetter, an air quality scientist who also serves as an adjunct professor in UC Berkeley’s Department of Civil and Environmental Engineering. “Heavy-duty diesel trucks are major sources of nitrogen oxides, which are a precursor to the formation of ozone and particulate matter (PM) in the atmosphere, and of black carbon PM, which, according to climate scientists, contributes to global warming and regional changes in climate, such as precipitation and snow melting.”

Outdoor air pollution is linked to 100,000 premature deaths per year in the United States, according to published studies. While the U.S. Environmental Protection Agency (EPA) has set emissions standards for new engines, most trucks and buses run for several decades, so the California Air Resources Board (CARB) has sought to accelerate emissions reductions with aggressive new regulations in recent years. As a result growing numbers of heavy-duty diesel trucks in California are using two control technologies, a diesel particle filter, which removes most particulate matter, and selective catalytic reduction, which targets emissions of nitrogen oxides (NOx).

The good news is that these regulations are having their intended effect, Kirchstetter and his collaborators, Rob Harley, professor of civil and environmental engineering at UC Berkeley, and Phil Martien of the Bay Area Air Quality Management District (BAAQMD), have found. “At the Port of Oakland, we measured dramatic reductions of nitrogen oxides and black carbon PM, indicating a large degree of success which should translate into local improvements in air quality, especially as more trucks on the road use these technologies,” he said.

Between 2009 and 2013, the fraction of trucks at the Port of Oakland equipped with a diesel particle filter increased from 2 to 99 percent, and the median engine age fell from 11 to 6 years. During the same period, the emission factor (or average emission rate) decreased by 76 percent for black carbon and by 53 percent for NOx.

California’s program of accelerated vehicle emissions reductions is especially important because fuel consumption is rising, and diesel fuel consumption is growing at an even faster rate than that of gasoline. “These new control technologies on trucks improve air quality despite increases in vehicle miles traveled and fuel consumption,” said Kirchstetter, who has been studying air pollutant emissions and controls in the transport sector for more than 20 years.

The technologies come with some trade-offs that the research team is investigating. Selective catalytic reduction can cause some trucks to have increased emissions of nitrous oxide (N2O), a potent greenhouse gas. With diesel particle filters, the catalytic oxidation process leads to increased tailpipe emission of nitrogen dioxide, NO2, which is a toxic air contaminant and is involved in the formation of ozone. While these were known side effects, the research team is measuring the amounts of these increases.

This summer Kirchstetter brought his research van to the Caldecott Tunnel, which connects Oakland to Contra Costa County, to measure emissions from a larger sampling of heavy-duty trucks. On a sunny weekday morning graduate student Chelsea Preble and undergraduate Troy Cados are in the van, having arrived at 6 a.m. to tune the instruments and catch the morning rush hour.

The equipment includes an air sampler hanging directly above the right lane, a video camera that records the truck and its license plate as it passes under the sampling location, and state-of-the-art monitors to capture several species of pollutants.

“Our measurements are very fast. We measure concentrations at a rate of one or two times a second, which is near real-time,” Preble said. “That allows us to link the emissions profile to the attributes of each passing truck, which we get from its license plate. So our methodology allows us to understand emissions changes associated with technologies.”

The team plans to return to the Caldecott next summer and again in 2017 when nearly all heavy-duty trucks will have diesel particle filters installed. CARB’s Truck and Bus Regulation applies to approximately 1 million trucks and buses operating statewide.

“Our study is an important verification of the impacts of California’s air quality regulations,” Kirchstetter said. “California tends to lead the way in air quality. The technologies we’re evaluating will eventually dominate truck fleets nationwide, so the significance of our study extends far beyond California.”