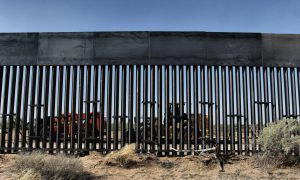 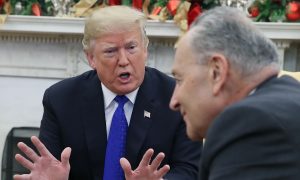 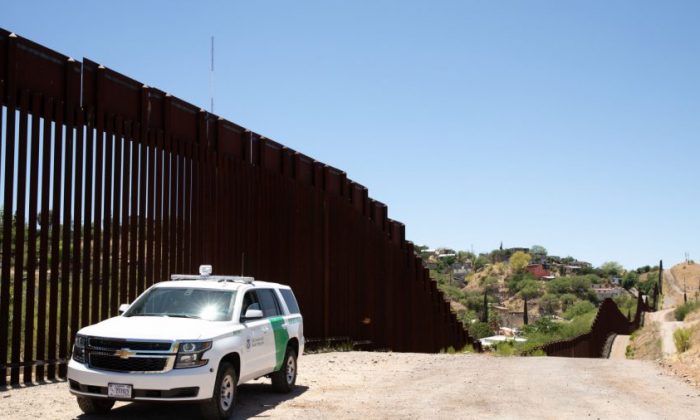 Border Patrol guards the fence at the U.S.-Mexico border in Nogales, Ariz., on May 23, 2018. (Samira Bouaou/The Epoch Times)
US News

An Air Force veteran who lost three limbs said he was inspired to raise money for the border wall championed by President Donald Trump and launched a fundraiser on GoFundMe.

Brian Kolfage’s campaign, “We The People Will Fund The Wall,” has received nearly $4 million after just three days.

Its goal is listed as $1 billion and Kolfage said he wants the fundraiser to bring in even more for Trump’s wall.

“The government has accepted large private donations before, most recently a billionaire donated $7.5 Million to fund half of the Washington Monument repairs in 2012; this is no different,” Kolfage wrote.

“Like a majority of those American citizens who voted to elect President Donald J Trump, we voted for him to Make America Great Again. President Trump’s main campaign promise was to BUILD THE WALL. And as he’s followed through on just about every promise so far, this wall project needs to be completed still.”

Kolfage said the violence perpetrated by illegal aliens prompted him to act.

“As a veteran who has given so much, 3 limbs, I feel deeply invested to this nation to ensure future generations have everything we have today. Too many Americans have been murdered by illegal aliens and too many illegals are taking advantage of the United States taxpayers with no means of ever contributing to our society,” he wrote.

“I have grandparents who immigrated to America legally, they did it the correct way and it’s time we uphold our laws, and get this wall BUILT! It’s up to Americans to help out and pitch in to get this project rolling.”

If each person who voted for Trump contributes $80 then that would equal $5 billion, Kolfage said. The wall is estimated to cost $24 billion.

He said he was inspired by a New York Post op-ed that questioned why no one had launched a fundraiser for the wall.

“If Congress won’t secure the borders, then it is necessary for the public to step in. It would be a modern and critical twist on the Founders’ ideal of self-government,” wrote Michael Goodwin in the op-ed.

Another $161,123 has been raised so far through an earlier fundraiser launched by a nonprofit The American Border Foundation.

A number of people said in a telephone and online survey recently that they were willing to privately contribute to build the border wall.

A Quinnipiac University poll released on Dec. 18 found the highest support for the wall since it began asking about it in November 2016, with 43 percent of respondents supporting it.

According to his website, Kolfage was on his second deployment for Operation Iraqi Freedom in 2004 when the air base he was working in was attacked by a rocket.

A shell exploded several feet away and he eventually lost both his legs and his left arm.

His biography says that “till this day he is still the most severely wounded Airman to survive any war.”

After being discharged, Kolfage graduated from the University of Arizona’s School of Architecture and works as a motivational speaker. He often visits wounded soldiers at Walter Reed, where he was treated, and has two children with his wife.