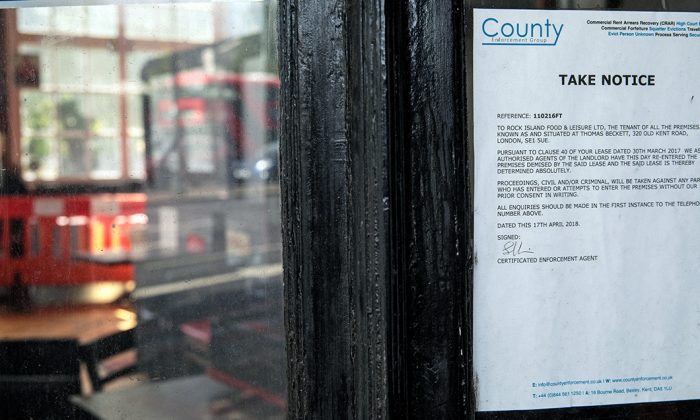 A repossession notice in a file photo. (Jack Taylor/Getty Images)
US News

A disabled Air Force veteran may have no choice but to sleep rough after his Arizona home was auctioned off by the authorities on June 20.

Former U.S. Air Force Officer Jim Boerner was gobsmacked when a stranger arrived at his Mesa mobile home and said they had bought his property for $4,400, the Arizona Republic reported.

“I said, ‘What are you talking about? … This has got to be wrong,'” he told the newspaper.

Boerner, 49, quickly discovered that Maricopa County had auctioned off his mobile home because local authorities thought he owed $236 in property taxes. He had no idea he was at risk of being evicted as he thought that his application for a reduced property tax rate on the basis of his disability and limited income had already been approved, according to the report.

“Had I known I was in peril of losing my home, I would have paid it in full,” he said.

This disabled military veteran thought his taxes had been paid.

Then his home was sold at auction.https://t.co/N4fwbI98i0 via @azcentral

Staff at the Maricopa County Sheriff’s Office allegedly told him he owed a total of $641 of which $405 was overdue from the previous year. However, Boerner only paid $405 because he only remembered the second amount, according to the paper.

Boerner told the paper that he had not worked since 1991 due to spinal and brain injuries he suffered while performing training exercises at Keesler Air Force Base in Mississippi. He bought the buttercup yellow mobile home in 2017 to enjoy a more affordable lifestyle.

Boerner supports a cat called Samantha by repairing guitars he buys at garage sales. He is also known to deliver flowers to widowed neighbors during the holidays and on Mother’s Day.

“I love my home. I love my neighbors. This was my nest egg. This is where I was going to retire. And now I don’t have that assurance anymore.”https://t.co/N4fwbI98i0 via @azcentral

The new owner is listed as Advanced Dynamic Energy Ltd. under the contact Alex Patron, the paper reported. Boerner claims that Patron is also known as Lester Payne.

According to the Republic, Boerner said he explained his situation to Payne over a drink and even offered to buy his mobile home back, which Payne initially agreed to. However, Payne later allegedly asked for $30,000, which was much higher than the original purchase price and the $5,000 Boerner was willing to offer.

When a stranger knocked on his door last month claiming to have bought his home at auction because of $236 in late taxes, he was floored. https://t.co/3riuO9ldQJ

When Payne made counter offers, the amount Payne allegedly sought was $26,000 and later $52,000 according to text messages obtained by the paper.

Payne has now issued a letter of eviction to Boerner.

“You must leave now, or I will sue you for eviction,” the letter said, according to ABC15.

When ABC15 contacted Payne, he said he felt bad for Boerner but would not comment further.

Payne claimed he was willing to negotiate with Boerner but changed his mind after the talks turned sour, the Republic reported.

Text messages revealed that Boerner had been threatening to expose details from Payne’s police record, which lists shoplifting, driving under the influence, and aggravated assault, among others.

“We are talking to the county attorney’s office, we are looking at every possibility we can to reverse this,” he said. “He is disabled after serving his country, he comes home, and now he is thrown out. That same government just threw him out of his house for $200.”

According to the report, the office of Maricopa County Treasurer Royce Flora would normally mark a mobile home owner as delinquent in paying outstanding property taxes after a 30-day notice period. After this grace period, the office would report the delinquency to the Maricopa County Sheriff’s Office.

The sheriff’s office would then normally contact Boerner to ask for the amount owed and explain how and where to pay the outstanding property taxes.

“After 30 days the sheriff can sell the property out from under them,” Bellus told ABC15.

The challenge lies in the different treatment of permanent and mobile homes, the Republic reported. A single family home owner would usually have five years to repay the outstanding amount before the property would be foreclosed. Mobile homes are categorized as personal property, meaning they can be auctioned off as soon as a property tax payment is missed.

This legal definition has created major difficulties for Boerner in finding help.

“I can’t encumber my parents with a 50-year-old guy moving in with all my stuff, I can’t do that to them,” told ABC15.