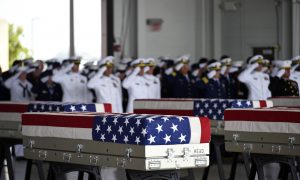 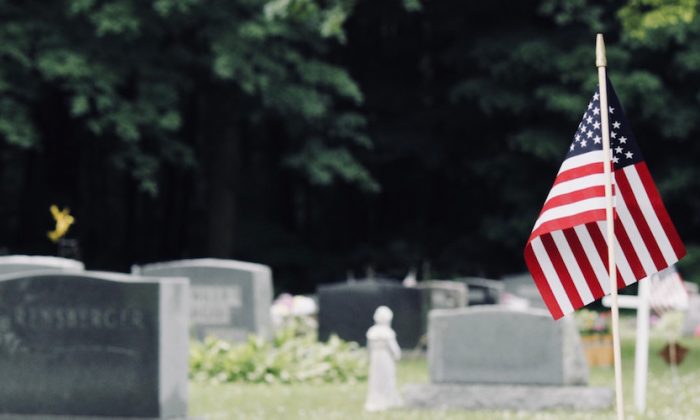 An American flag at a cemetery. (Sydney Rae/Unsplash)
US News

Air Force Veteran Had No Family to Bury Him, But Scores of Strangers Paid Respect

Scores of people gathered in St. Louis, Missouri, on a Friday morning, March 1, to pay respects to a man they didn’t even know—a U.S. Air Force veteran, who would have otherwise been buried alone.

Sergeant Robert Kenneth Wunderlich was scheduled to be buried with full military honors—including the folding of the flag and playing of the taps—at Missouri’s Jefferson Barracks National Cemetery at 10 a.m. on March 1.

“Please join us in standing a flag line of honor and respect for Robert Kenneth Wunderlich,” a notice for his burial posted Feb. 28 read. “There is very little information available for Mr. Wunderlich as he is an unclaimed veteran. He honorably served our country in the United States Air Force.”

Wunderlich is believed to be in his 50s when he died. No picture was provided of the veteran, and not much else is known about his service record, according to reports.

He was part of the Missouri Veterans Endeavor (MOVE), a local community that provides services to homeless veterans.

MOVE’s executive director William Wallace told The Daily Caller that Wunderlich did have a few surviving family members. However, they could not come due to the late notice, having been notified only 24 hours prior to the funeral.

The public also only had notice of 24 hours.

Even with such short notice, a sizable crowd had gathered to pay their respects, which according to The Daily Caller numbered as many as 150 people.

One attendee, Larry Nations, reflected on the significance of attending the veteran’s burial service.

“I always think it’s important for kids to understand that there is someone sacrificing a lot of things for our freedom,” he told Fox 2 Now.

The Patriot Guard Riders, a non-profit whose members attend the funerals of fallen U.S. military and first responders, were present. Several of its members told The Daily Caller that although the temperature was around 30 degrees Fahrenheit, the turnout was one of the best they had seen at an “unaccompanied” service.

“He had a big family here today,” one attendee said, according to the news outlet.

Air Force veteran Randy Pierpont told KMOV that he had heard about the burial service on that very morning, but still felt compelled to attend.

“Felt sad [that] he didn’t have any family here. At home, I jumped in the shower and I told my wife I was running over here,” he said. “My eyes were watering, still kind of are. I was in disbelief this many people would show up.”

As the ceremony ended and people were leaving the event, one man called out: “Show of hands: how many of you just learned about this service this morning on the local news?”

According to the Daily Caller, more than two-thirds raised their hands.

‘Everyone Deserves a Respectful Burial’

John Robinson, the owner of Gateway Cremation Services, had stepped in after receiving a call from John Cochran Hospital regarding a veteran without a family.

“They call us when they need help and we will make sure that [the veterans] are buried respectfully,” Robinson told Fox 2 Now on Feb. 28.

“Everyone deserves a respectful burial. That’s just our human nature, to take care of people that we know even a little bit. We know they’re a part of this community and that’s enough by itself,” he added.

Karl Lund, an executive board member of USO, told Fox 2 Now that people should pay tribute to veterans.

“The blanket of security and the freedoms we enjoy were provided by our veterans, so if you don’t feel like you should be there, then I say you’re wrong because you are a benefactor of their service, of their sacrifice,” he said. “We have to pay tribute to those who served whether they’re with us or not.”