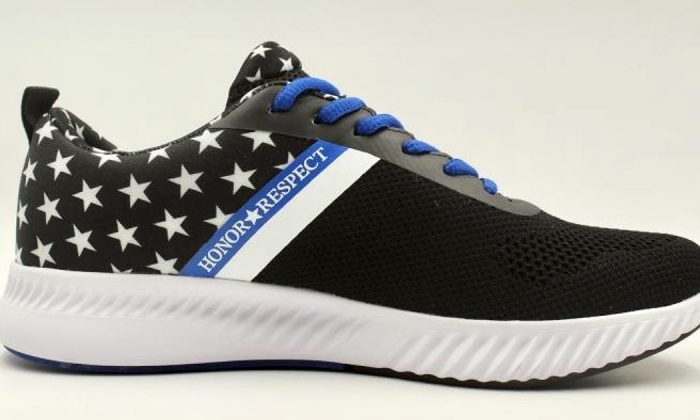 Those who missed out on buying Nike’s running shoes with the controversial ‘Betsy Ross flag’ should consider picking up a pair of police-themed sneakers instead from the ‘Honor and Respect’ store, a U.S. Air Force veteran said on July 3.

Marion Iowa Police Department Police Corporal and Air Force veteran Ron Slagle hopes anyone who missed out on Nike’s Air Max 1 4th of July trainers due to the manufacturer’s recall will support law enforcement officers by purchasing a pair of ‘Honor and Respect’ shoes.

The online store describes the sneaker as having a supportive foam sole with fly knit outer material. The heel and tongue is decorated with white stars on a stretchy black material. The sides are decorated with a blue and white ribbon with the words “Honor and Respect” printed on it. The shoe laces are blue.

“Show your report in style,” Slagle’s online store said in the product description.

Slagle started the ‘Honor and Respect’ this year, partnering with the Code 9 Project and Blue H.E.L.P. to help support America’s public safety officers and their families.

Proceeds from each sneaker sold will go to the Code 9 Project and Blue H.E.L.P, which aim to relieve post-traumatic stress disorder and reduce the number of suicides among police officers and other civil servants.

“The first nearly 50 days of sales have been outstanding and that will allow Honor and Respect LLC to help both organizations even more,” Slagle said on Facebook. “The shoes along with other apparel including hats and shirts are made for a reason, to help first responders … a year ago last June it was just an idea, so a year later we have marketed this shoe, a shoe with a story.”

Slagle criticized former National Football League Quarterback Colin Kaepernick as a “disgrace to the actual profession” for complaining to Nike that the Betsy Ross flag stitched on its shoes was offensive.

“The Betsy Ross objection with the shoe for Nike translates into a loss of history,” Slagle told Fox and Friends. “I believe at times that’s the biggest loss we have is really knowing what the history about that is.”

Thanks @foxandfriends for sharing this story. Just preordered a pair… https://t.co/eDjKxKBfxx

The Betsy Ross flag with 13 stars was designed to represent the unity of 13 colonies back in the year 1876 when slavery was widespread in North America.

Slagle disagrees with Kaepernick’s comparison between the Betsy Ross flag and slavery.

“The flag means freedom,” Slagle told Fox and Friends. “The flag is a symbol of what we fought for and a lot of Americans are still fighting for today.”

Code 9 is offering a free gift with every pair of Honor and Respect shoes ordered until the late hours or July 4.

“Get a free t-shirt with your order … just indicate in customer comments the size you prefer,” Code 9 said on Twitter. “The first four days of July will honor the NYPD and the four officers lost in the past three weeks. All service is honorable and these officers served their city with distinction. Let us all honor them during this time of celebration of Independence.”