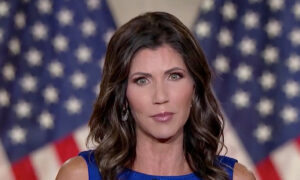 An F-16 Thunderbird before the New York Air Show at the Stewart Air National Guard Base in Newburgh on Sept. 1, 2016. (Colin Fredericson/Epoch Times)
US

Two pilots were trapped inside the jet. No injuries were immediately reported, according to Fox8, adding that emergency workers are trying to extricate the two out of the aircraft.

The plane flipped on its top when a gust of wind hit the plane as it was taxiing to a staging area, the Dayton Daily News reported. It ended up in the grass.

“The City of Dayton is confirming an aircraft accident involving one of the acts scheduled to appear at the Vectren Dayton Airshow this weekend,” a city spokesperson told the Dayton Business Journal. “There were 2 people on board. Airport Fire and Rescue are providing assistance at the scene. The airport is open.”

The incident happened before 12:30 p.m. where aircraft and crews are practicing for the upcoming Vectren Dayton Air Show.