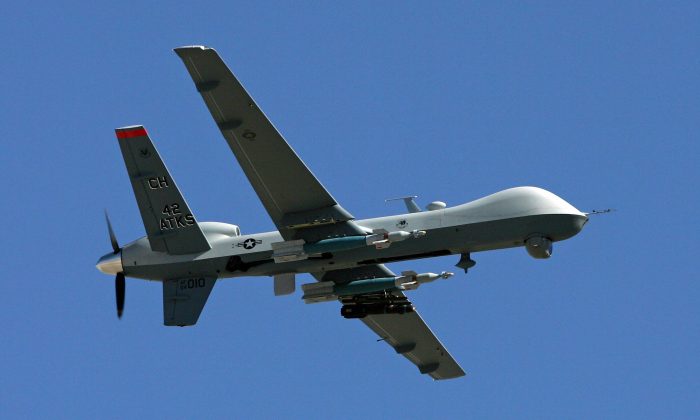 Burdened by old, maintenance-heavy Cold War-era planes, the Air Force needs a cash bump to meet its obligations to the National Defense Strategy, according to a report from a respected defense think tank.

But growing the force in size isn’t enough alone, according to the Jan. 22 report, which makes four other key recommendations.

The report by the Center for Strategic and Budgetary Assessments says that the Air Force needs to be able to operate inside the reach of China and Russia’s long-range missile systems—a zone of military discomfort called a “contested environment.”

To achieve this, it needs more stealth aircraft, more drones, and to be able to hunker down in better-protected allied airbases. It also needs to pack next-generation weapons such as hypersonic missiles, along with incorporating technology that allows the military to integrate and function as a whole team.

“Creating a more range-balanced, survivable, and lethal force will require a commitment by DoD and the Congress to significantly increase the Air Force’s annual budgets,” says the report.

The Pentagon will put forward its 2021 defense budget proposal in the spring, which will go through the grinder of Congress in the autumn.

Most analysts agree that the Air Force is dragged back by having too many old aircraft, which are more costly to maintain.

The CSBA report builds on their more extensive report commissioned last year by the Pentagon, which recommended how to adjust the air force for “great power competition” with Russia and China, as directed by the Trump Administration’s National Defense Strategy.

“The Air Force has been living off major weapon systems that were, in many cases, designed and delivered during the Cold War,” said the latest report introduction. “With the exception of a small fleet of 187 stealth F-22s, 21 stealth B-2s, and now a small but growing force of F-35As, the Air Force stopped procuring next-generation fighters and bombers after the Cold War.”

“After decades of force structure cuts and deferred or canceled modernization programs, the Air Force’s CAF [Combat Air Force] has reached a point where it lacks the capacity needed to support the National Defense Strategy,” according to the report. “Modest growth in the size of the Air Force’s fighter fleet could be achieved by accelerating F-35A procurement over the next decade and developing a multi-mission PCA/ PEA aircraft and other next-generation capabilities.”

After this, the Air Force should add in more heavy-lifting bombers.

The National Defense Strategy demands the military as a whole be able to handle one major and one minor war simultaneously. The report, however, recommends that the Air Force have the capacity to cope with two major wars at the same time. This echoes with the view of some other analysts who point out that unlike the Army and the Navy, the Air Force has to fully straddle two major theatres: Northern Europe, and the Northern Pacific.

In the medium term, the report recommends procuring new, dispensible UAS that could team up with regular crewed aircraft.

The U.S. military as a whole sees using numerous unmanned platforms—on the sea, under the sea, in the sky, and on the land—as a key to its future capacity to undo the threat of Chinese and Russian long-range missile and anti-aircraft systems.

The air force also needs to get geared up to handle working inside the reach of its adversaries’ military fists. To do this, it will need to increase its stealth aircraft, says the report.

“Blunting a great power adversary’s attacks and preventing it from achieving a fait accompli will require the Air Force to conduct operations from the outset of hostilities in contested and highly contested areas,” said the report.

To this end, the air force should ramp up the acquisition of stealth fighters such as the F-35A, and upgrading its bomber fleets.

In the longer term, the report recommends a new generation of surveillance drones and bombers which can operate within striking range.

Shoring up the forward airbases which are now under the shadow of adversaries’ missile reach is another critical priority.

This means it must develop new operating concepts, according to the report, along with investing in missile defenses and logistics infrastructure.

The report says that the air force budget suffered most in the post-Cold War cuts across the services. The budget rose during the War on Terror. But most of that extra cash went on supporting counterterrorism operations, “not new fighters, bombers, and other next-generation systems better suited for great power conflict.”