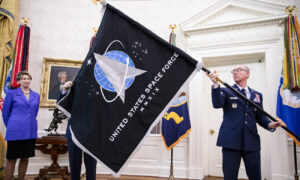 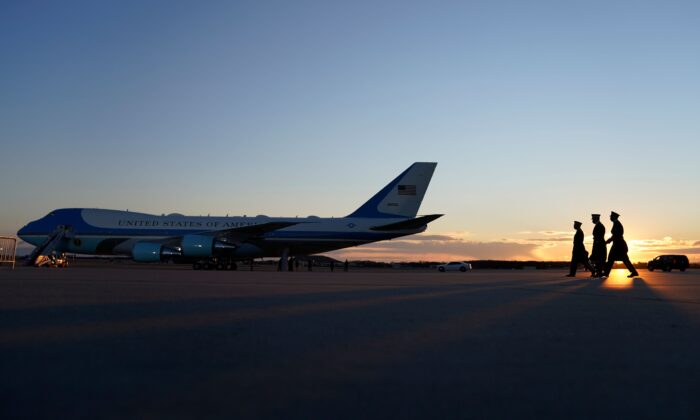 Preparations are made at Joint Base Andrews in Maryland for the departure of outgoing President Donald Trump on Jan. 20, 2021. (Alex Edelman/AFP via Getty Images)
US News

The Air Force is reviewing security at its facilities around the world after a man without authorization gained access to Joint Base Andrews in Maryland this week, entering a jet.

“Everybody takes seriously what happened, and they will do a thorough investigation,” Pentagon spokesman John Kirby told reporters in Washington on Friday.

Security adjustments have been made at the base, home to Air Force One, and officials are ordering a review of all security protocols on facilities worldwide.

Officials at the base said that an adult male gained access on Thursday, at one point entering a C-40 aircraft assigned to the 89th Airlift Wing. Security officers responded and detained the individual.

The Air Force booked the man and gave him a federal summons for trespassing. Officers then handed him over to local law enforcement, because he had two outstanding warrants.

The man wasn’t armed, didn’t harm anybody, and there was no indication he had links to extremist groups.

“The security of our installation is paramount,” Col. Roy Oberhaus, vice wing commander of the 316th Wing at Joint Base Andrews, said in a statement. “This was a serious breach of security and Joint Base Andrews is investigating the incident to determine how this happened so it doesn’t happen again.”

The breach occurred a day before President Joe Biden flew from Joint Base Andrews to Delaware. Presidents are typically flown to the base in a helicopter from the White House before switching to a plane for further travel.

Located in Prince George’s County, the base is east of the city of Alexandria and about 12 miles southeast of Washington.

According to the Air Force, C-40 planes provide “safe, comfortable, and reliable transportation for U.S. leaders to locations around the world.” The planes are primarily used to fly combatant commanders and members of the presidential Cabinet and Congress. One version is designed to be an “office in the sky” for senior military and government leaders, boasting an ability to broadcast data and video. The design is based on the commercial Boeing 737-700 business jet.