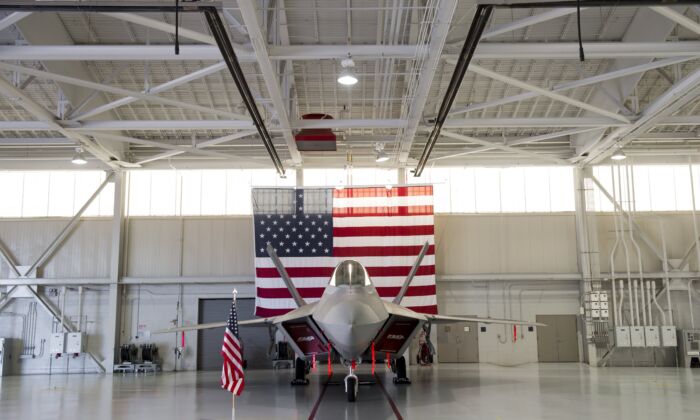 A US Air Force Lockheed Martin F-22 Raptor stealth fighter aircraft is parked inside a hangar at Joint Base Langley-Eustis in Hampton, Virginia on Dec. 15, 2015. (Saul Loeb/AFP via Getty Images)
US News

The U.S. military faced backlash over a planned drag show at its first diversity and inclusion event at an Air Force base in Virginia which was promoted as children-friendly.

The first-ever Diversity, Equity, and Inclusion Summer Festival was presented at Langley Air Force Base on July 30. According to the event website, the festival was to feature a number of guest speakers and cultural groups’ performances, as well as a drag show.

“This event was an opportunity to celebrate the diversity of our teammates and our families,” Joint Base Langley-Eustis (JBLE) said in an updated event announcement on Facebook on Aug. 1, adding that because of unacceptable language, some “comments have been turned off.”

“The event committee purposely advertised the performers to empower individuals and their families to choose which portions of the event they wish to attend,” read the post.

“JBLE leadership is committed to celebrating differences and will continue to cultivate an inclusive environment where every Soldier, Airman and civilian feels valued,” it continued.

The announcement came after a backlash over the drag show on the platform.

Critics of the event questioned why the U.S. military was hosting a drag show, with some Facebook users calling it a “disgrace.”

Many users also expressed anger over the plan of hosting a drag show at the event. The organizers advertised to families that there would be “bouncy houses and face painting for children” at the festival, according to the festival’s website.

“They need to leave kids alone they are grooming them,” read one now-hidden comment.

Joshua Kelley, the drag show performer known as Harpy Daniels, said the show was canceled due to “some unseen circumstances in my life,” according to a July 30 statement on Facebook. Photos on the JBLE’s Facebook page also didn’t include any images of the drag show.

JBLE didn’t reply to the request for comment from The Epoch Times.

The mission of the event was to “provide education, increase collaboration through outreach efforts, and recognize the diverse composition of JBLE,” according to the website.

The event came amid an accelerated push for diversity, equity, and inclusion in the U.S. military in recent years. While President Joe Biden’s administration has touted diversity initiatives as a way to improve cohesion within the military, some lawmakers, military officials, and experts worry the trend of prioritizing social issues will come at the expense of military preparedness.

The Breaking Barriers Alliance of JBLE, a committee under the base’s Office of Diversity and Inclusion, planned the event. It was approved and authorized to use U.S. military resources by at least one of the base’s top officials, Colonel Gregory Beaulieu, The Daily Wire reported.

“All featured guests will be participating or performing as volunteers. The installation assisted by providing funding for logistical requirements, such as a tent, stage, tables, and chairs, etc., as specifically authorized by DoD [Department of Defense] regulations and policies,” JBLE told The Daily Wire.