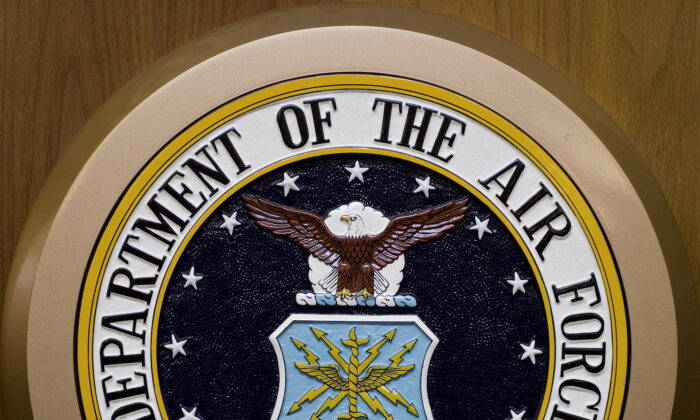 The Department of the Air Force seal hangs on the wall at the Pentagon in Washington, on Feb. 24, 2009. (Paul J. Richards/AFP via Getty Images)
National Security

Air Force Allows Use of Pronouns in Signatures

The secretary of Air Force public affairs announced on Dec. 20 that Airmen and the Space Force Guardians are now allowed to include pronouns in their signature block.

“Pronouns can be placed immediately after the name in parentheses or on separate lines within the signature block.”

The change was made via an update to the Air Force writing guide The Tongue and Quill, which provides formatting standards and guidelines for a number of official documents, including email, memoranda, letters, and papers. The changes were spearheaded by the LGBTQ Initiatives Team, created in April to work on issues that disproportionately impact LGBTQ Airmen and Guardians.

“The change request was driven by awareness of a restrictive policy that was being used against transgender Airmen and Guardians who were authentically representing themselves,” Lt. Col. Bree Fram, a LIT Transgender Policy Team co-lead, said in the announcement. “It was also important for many individuals often confused as being a different gender in their communications.”

Master Sgt. Jamie Hash, the other LIT Transgender Policy Team co-lead, said in the announcement that the change was a request she started from her installation’s Diversity and Inclusion committee.

“The LIT provided an opportunity to streamline the process for this change,” Hash said. “It is an example of how the DAFBAWG [Department of the Air Force’s Barrier Analysis Working Group] teams are addressing barriers, collaborating, and executing solutions in ways that have not been seen before to help Airmen and Guardians thrive.”

Hash said the explicit permission to use pronouns helps the Air Force by further “explicitly acknowledging the existence and dignity of non-binary military members and civilians.” She also said the change eliminates confusion for people with non-Anglo/Western or gender-neutral names.

“A foundational competency of the [Air Force] is to foster inclusion,” Fram said. “The use of correct pronouns is an easy way to show care and respect for Airmen and Guardians as individuals, and can help the [Air Force] retain highly qualified individuals.

“Allowing pronouns in an individual’s signature block is a quick and simple way to eliminate confusion and promote a more inclusive culture.”

The Air Force’s announcement came the same day the Department of Defense released its plan to combat extremism in the military.

The Biden administration has touted diversity initiatives as a way to improve cohesion within the military, but some lawmakers and military officials worry that the Pentagon is prioritizing social issues at the expense of military preparedness. Republican lawmakers released a congressionally commissioned report in July, making that argument.

Drawing on interviews with 77 Navy personnel, the report found “a broad consensus across interviewees on numerous cultural and structural issues that impact the morale and readiness of the Navy’s surface force.”

Along with identifying general problems associated with a bloated bureaucracy, the report focuses on the more recent trend of Navy leadership becoming entranced by social issues. Programs to encourage diversity, suicide prevention, sexual assault, and other issues have their value—but an overfocus on those areas comes at a cost, the report stated, quoting numerous officers.

“We’ve got so many messages about X, Y, Z appreciation month, or sexual assault prevention, or you name it. We don’t even have close to that same level of emphasis on actual warfighting,” said an unidentified destroyer captain.

“Sometimes I think we care more about whether we have enough diversity officers than if we’ll survive a fight with the Chinese navy,” said an active-duty lieutenant. “It’s criminal. They think my only value is as a black woman. But you cut our ship open with a missile, and we’ll all bleed the same color.”